Previously, in my post entitled "My Brain is, and I quote, 'OK'" I reported that my recent MRI came back without finding any "bad" causes for my recent diagnosis of dizziness and, ahem... giddiness.
While that was definitely good news, it didn't really solve the Vertigo. So my oncologist sent me to my ENT (Ear, Nose, Throat Dr.) to have him do some inner ear/balance testing. Some of you may wonder why we didn't think of "imbalance" sooner. But that's not very nice of you, and it's a good thing I'm freaking giddy, is all I'm going to say about that.
Anyway, so I went to my ENT. I asked him if I could blame it on the chemo. He said, "Probably not." Drat. I asked him if I could blame it on "the Vespa incident". He said, "Probably not." Double drat.
He sent me to an audiologist to do further testing.
First we tested my hearing and I passed that. Which made me really happy. It's funny how I get test anxiety over tests you really can't prepare for. Then she put a weird helmet on my head that tracked my eye movements and made me follow a bouncing ball for awhile. I saw what she was seeing on the computer screen and it sort of looked like this: 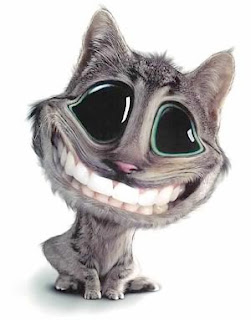 Again, the following of the bouncing ball made me sweat because I was worried I might not do it right. Also, there was no music for the ball to bounce along to and no words for me to sing along with. It felt rather pointless on top of the nerve-racking.
Then she pulled down blinders over the helmet and basically tried to make me dizzy. First she had me move my head in different positions. No biggie. No real test anxiety. Then she opened the flap for a second so I could rest my eyes, and I saw her pull out what looked to me to be a miniature Ryobi. Then she closed the flap and with the "torch" attachment, blasted 32 seconds of cold air into each ear. This was followed by 32 seconds of hot air into each ear, which was obviously achieved with "snow blowing" attachment. This did not produce test anxiety. It was not a test. If it had been a real test there would have been a beep or a bouncing ball. This was
more like a nightmare with my eyes open.
I don't think I passed it, but at least I didn't have to throw up in her wastebasket.
So apparently, the verdict on my vertigo, is that it's something called Benign Paroxysmal Positional Vertigo.
Here's what the Mayo Clinic says about BPPV:

Inside your ear is a tiny organ called the vestibular labyrinth. It includes three loop-shaped structures (semicircular canals) that contain fluid and fine, hair-like sensors that monitor the rotation of your head. Other structures (otolith organs) in your ear monitor movements of your head — up and down, right and left, back and forth — and your head's position related to gravity. These otolith organs — the utricle and saccule — contain crystals that make you sensitive to movement and gravity.

Here is what I surmise from all this is:
And so we go from there. My ENT is sending me to an inner ear physical therapist to see if we can finally get me some Satisfaction in this Vertigo saga.
Toodles!
Posted by Joules Evans at 6:45 PM

Yikes! That's a lot to digest in one go! My vertigo is not like that, but the original diagnostic name was equally baffling. I hope you find out what it is and can walk vertically (with appropriate levels of giddiness) soon!

Oh dear Jules, how you can make me chuckle!!!! I just adore you and your giddiness...dislodged crystals "aka Rolling Stones" and all!!! :o)

Keep "rolling along" Joules and get better before we trek off to Europe!We can't have two dizzy gals traveling. At least you have a physical dizziness while I , on the other hand,...

Love your sense of humor Julie, in spite of balancing vertigo. :)Apparently it hasn't dislodged your ability to make us laugh! I'd love to be with you when your giddy, we can be giddy together. It's my natural state...
Hey, if you get a chance, stop by my blog and say hi!

Hi!! Sounds STRESSFUL! I'm glad you got a diagnoses and hopefully you can learn to work with it!