I think that means we're at the half-way mark, and therefore we will now commence the countdown: T-10 and counting...10...(Stay tuned for the number 9, kids, three weeks from today!)

The reason I say I think on all that, is because I started the Herceptin on December 8 and am supposed to be on it for a year, once every three weeks, and so I'm just guessing that means I have to go till December 21 to make the full loop.

As a side-note on my treatment today, apparently I am now an advanced patient because I don't have to see my oncologist every time, which oughta make my treatment day a bit shorter. I like the theory that it is because I am advanced in my treatment and such; but I figure it's either that, or I might get on her nerves.

Well, Dave is here, time to Lidocain (the port) and Ativan (the patient) up to go and commence the countdown.

While I Have a Few Spare Moments in Between The French Open and Wimbledon...

I thought I would blog a bit and catch things up. But I've gotta warn ya, this blog might be boring. No exciting Vespa crashes in Rome is what I'm saying. I know I might lose a few readers here, but I just feel like I have to be honest and say that I am hoping I can keep further shenanigans like that at bay. So this is me, chilling and making peace from shenanigans and such. 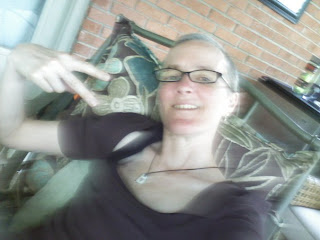 In other words...my back deck is open, and summer is on! I really like saying that, because there were times last fall when I wondered if I would see the spring and my hair sprouting, let alone sit out on my back deck and have a cold drink on a hot summer's day. But here I am, and how good is God to me!

Today is five weeks from my Roman wreck. I saw the ENT this week and got a thumbs up on the healing process concerning my broken face. The thing that is the hardest to deal with is that my upper front teeth, specifically the ones I use to take a bite of food with, are still loose, which means I am having to knife and fork everything I eat, and then chew way back in the left of my mouth. Kind of a pain. Not in the painful sense; they don't hurt. It's just that they are more like wallflowers on my face instead of being useful little engines that think they can bite. My jaw is still sore from the jar it took, which adds to my chewing issues, and sometimes makes it tiring if I'm in a chatty mood. I have some numb spots on my forehead, and the tips of my nose and my chinny chin chin. The ENT said those sensory nerves will be the last things to heal, so I'm trying not to be bothered by them too much. Although I can't really move my right eyebrow like I used to when I want to give people "the look", so I'm having to improvise with that. All in all, he reminded me that if I had to crash I did it right. Which is a skill I didn't know that I had, but now am probably going to struggle with pride over.

I have been getting to play quite a lot of tennis, and by one of my tennis bud's recent assessment, am about 55-60% back. I'm not saying it's pretty tennis or anything, but it is pretty much like Christmas in June to me to be out there again. I've even got a slight sock tan going, which is a very sexy thing in the tennis world. I have had to improvise a new serve, which is a bit poofy, but I don't have the range of motion for my normal serve and overhead with the port sitting directly on my angry pec. But at least I can put a ball in play, and pretty much keep up with a point now. I don't have my strength, stamina or speed quite back, but am getting there. My feet are still a bit numb and tingly and sometimes feel like blocks of cement underneath me, but I keep on thinking if I just keep on playing the blood has got to circulate and eventually pay the tax-all bill. I got to play in my first USTA match Thursday last. It was a doubles match; I had a delightful partner; and we won the match in two sets. This week I have another USTA match on Thursday, and then a match with my neighborhood team on Friday. It feels so good to be back.

In other news, Amanda signed a lease to move into an apartment on campus for the fall. Which I am still coming to terms with. I am so proud of her for the way she has handled this difficult year and the craziness of commuting on top of it all; and I can see the value of living on campus even if I don't like it. She is so much more "grown up" than I was at her age. And I am trying with all my heart to be as excited as she is about her flying and all, but the leaving my happy little nest part is hard to jump up and down about. I can not imagine our home without my little girl around. Before, even though we were only two, we totally out-numbered the boys, nevermind the math when Amanda is on your side; now I will be the lonely female soul, trying to hold my own in this sea of high school boyishness, of which I count Dave the ringleader. (And I really don't think he minds, since he is so enjoying reliving this stage of his life again with his two captive cohorts!)

Amanda is in exam week this week, and I'm sure would appreciate any prayers you could send her way. She is off to her Biology final as I am typing. Go Amanda! Mum is praying for you!

The boys are finishing up history this week, and thus the craziest year of homeschool EVER. I am so glad that I had planned out the year before the cancer hit. And I am so glad Mikey asked to join the Learning Tree Co-op, because there is NO WAY we could've made it through this year without a little help from our friends. (You should be thinking Beatles right now if you are on my wavelength.)

We are all so ready for summer break. And I'm already there in my mind. And just waiting for it on my back deck.

Cheers and love,
Joules
Posted by Joules Evans at 10:38 AM 6 comments: