This post comes to you from a place I've been recently: a place called Vertigo. (Cue U2)
Uno, dos, tres, 14? Well, yeah, that's how we count there. Anyway, cuatro would have been way to predictable. But I digress. And that's one of the things about Vertigo. They say your mind can wander there. It's true. Been there, done that. Bought the t-shirt. It looks like this:

If you print out this blog... then carefully cut around the preceding octagon... then fashion it into a top by taking a pencil (which, if you're anything like me, there is probably one conveniently stashed right behind your ear) and poking a hole in the middle of the well, for lack of a better term, spirally thing... then spin your top and just stare at it for hours on end... then you will have a glimpse of this place called Vertigo.
So I woke up a few weeks ago and the second I opened my eyes and I wondered if I wasn't in Kansas anymore. But then I remembered that I don't even have a dog named Toto. Still, the room was spinning around me and I couldn't make it stop for a minute or two. I felt like I was falling through the bed and I just braced myself to keep afloat in the waves of the blankets. It was actually quite scary. While I was in the Vortex of the Vertigo I could not get up to get out of bed to go find Dave eating his bowl of Kashi or one of the boys, still fast asleep. I don't usually talk to myself, but after the minute or two I tried once more to get ahold of myself and said quite firmly, "Steady!" And things did slow down a bit. I was eventually able to get off the merry-go-round I like to call my bed. I did rise. I did try to shine. But the dizzying light was not me shining. I hate to admit this, but I was then, and still have been having episodes, of feeling... DIZZY. And I'm not even blonde anymore! Go figure.
So I called my oncologist's office and had a chat with one of my fave nurses in the world, Brenda. And she told me Dr. Lower thought we oughta go ahead and do an MRI because of those "Damn Spots", not to mention, the "Vespa Incident". I thought that sounded reasonable and that I hadn't had any really serious photo shoots of my brain since Rome, so why not?
Then they send me the script for the MRI and I note the diagnosis: 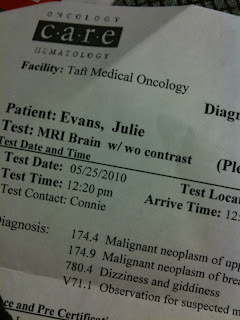 I have to admit, the giddiness part was a wee bit offensive. I am GLEEful on a weekly basis. But seriously, GIDDY? Here is a pic I took showing just how shocked I was to see it it in writing, that I, yours truly, am for all medical intents and purposes, diagnosed, IN WRITING, as giddy: 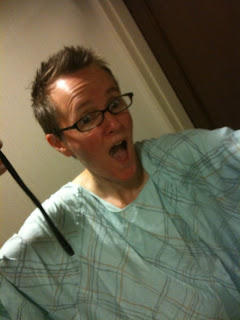 Then I thought, why not embrace this giddiness. Now, as you know I have been doing fashion shows these days. So I thought, why not? Right here, right now. In my dressing room. And so here are the bootleg photos. Wardrobe provided by The Mary Jo Cropper Breast Cancer Center of Bethesda North Hospital in Cincinnati. And Adidas. Although I haven't received the royalty check for that product placement yet. I'm hoping the iPhone product placement will net me an iPad as soon as Apple reviews this photo shoot done entirely with just me and my iPhone. Imagine what I could've done with an iPad. It boggles the imagination. Anyway, no word on that yet, either. So without further ado, here is my "ta-da" pose: 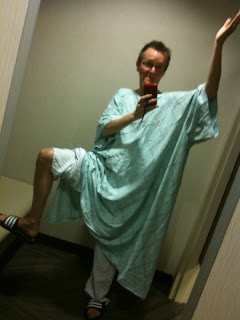 I know the bared calf was risque, but you know how high fashion is these days. What's a supermodel to do, but flex it?
And here's the cord you pull when you get bored in the dressing room. Or if the nurses aren't paying enough attention to you. 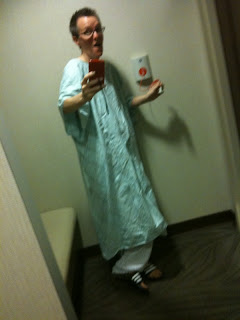 I didn't really pull it because I didn't really get bored at my own fashion show. It has actually kinda revolutionized the fashion world and I really wish you could've been there.
Anyway, so you're probably wondering what was all the buzz about my brain? Well, the oncologist's office called back after all the publicity from my fashion show antics died down ever so slightly, and the nurse said that my MRI results were back and that my brain was, and I quote, "OK."
I said, OK, as in good?
She said, OK as in OK. No evidences of masses or hemorrhages.
The word I was looking for, and I don't know if she was avoiding the word, dodging the topic, or just withholding helpful information, was NORMAL. But I didn't press her any further.
I'm OK with OK. Normal was probably pushing it anyway. And really, it's overrated if you ask me.
So after the oncology nurse called to tell me my brain was OK, a dear old Texas bud called, and I told her the good, I mean, OK report. She's an emergency room nurse, so I try to sound all smart and medical when I talk to her, speak her language and such. Well, apparently this doesn't work so well for me when I have Vertigo. Either my tongue got tied, or that oncology nurse wasn't telling me something, but I told her that the MRI showed that I had no evidence of masses or hemmorhoids on my brain. Well that's a relief.
And on that note, the note of H, as in preparation, I must sign off and bid you adieu. The world of high fashion continues to call. Ciao dah-lings!
Posted by Joules Evans at 7:57 AM

Hi Julie! I got to experience the not-so-wonderful world of vertigo when I was 17 in high school. We lived in Arizona at the time and it just came on unexpectedly and without ever any clear reason. It lasted a month (?) maybe, can't remember. I just remember what a horrible feeling it was thinking that the floor was coming UP and hitting me with such force (instead of feeling like I was falling and hitting the floor). All you can do like you said is just ride it out when it happens (and hang on for dear life to whatever you're on at the moment). I found that when I sat down or laid down and hung on it would go away quicker. Sorry you're going through that and I hope it goes away soon! I never took anything for it, just waited it out. Kept me from joining the basketball team (good news for the basketball team!)!
Angela

Thanks for making my day! AWESOMELY FUNNY! Sorry you had to experience the vertigo but that was fabulously well-written!

It's taken me, like, 14 days to comment, but I just wanted to say that I too suffer from giddiness--it's hard to be taken seriously. like the risque pose. ;)

Well what's causing it then?! As long as its nothing serious I s'pose it will pass. I've had some dizziness myself...pretty mild but makes me feel, for lack of a better (or real) word, "swoopy." Like I'm walking sideways. I think i'll chalk it up to giddiness...I like that!
Chris S.

I liked the "shocked" pose the best!
Becky E

PS But why did they use that word 'giddy'? Seems strange to me!

Salve Mrs. Evans,
Sorry you had to go through that. I admire your attitude though :). Hope you feel better.
Tua soror in illo Domine (hope I got that right:). -Muriel