I flew to Folly this past weekend.
My sister lives there. Her name is Jennie. She is eight years younger than me. I have always thought she was mine. Have practically "raised" her as one of my own. (No offense to our Mum.)
We don't see each other nearly enough, but when we finally catch up, we make up for lost time.
She has the sweetest little boy, that I call "Charlie Brown". He used to have one little tuft of hair when he was littler, and it just sort of stuck in my head.
He calls me "Snoopy".
I love it.
Last time I was in Folly was during my boys' spring break.
Jennie was planning Charlie Brown's 4th birthday party. It was like a hurricane of activity. I was having my last spring break of homeschooling my kids. We both were worn out, on opposite ends of the spectrum.
We met somewhere in the middle, out on her back deck, with our elbows on the table, sipping on a couple of bottles of wine between us. Every now and then she lit a cigarette, which did a little waltz with the fireflies, as she punctuated syllables and such.
We talked as deep as the red wine. We always do. That's one of the lovely things about red wine. And my sister.
She dove deeper and came up for air, asking me to baptize her.
I'm not even kidding that when she asked me to baptize her this song wafted up from the basement, where the boys were watching, O Brother, Where Art Thou:

Our elbows never made it off the table to pray in the river that night. Sometime around 3 a.m. our eyelids grew heavy like the sleepy South Carolina sky and we decided we better cork the bottle for the night and go to bed. A little too much communion followed by a 3 a.m. baptism is probably not the best liturgy.
Anyway, you know what they say about time flying. Well, it did. And before we knew it, spring was broken in, and it was time for the road trip home.
Jennie and I left things that we'd try and coordinate her summer visit with the summer student conference we do at my church where they have a beautiful baptismal service at the end of the week, when my Redheads and I could baptize her.
Before we knew it, it was the week of the conference was at hand. It didn't look like it was going to work out this time either. I figured it would work out when and the way it was supposed to work out. Jennie has always lived by this easy-going philosophy. That's one of her many charms. And if there's anything I've learned from my sister, not to mention, cancer and chemo, it is to sit back, relax, and enjoy the ride. It's a lot more fun than trying to run the ride. And a lot less pressure, since I'd probably wreck the world if I was in control.
So it was the Sunday before the conference, and I was sitting in church, listening to our pastor, Dave Workman, talking about "going and making disciples, baptizing them...." He told a story about a guy who had recently emailed him about baptizing a couple of friends, in the pond behind our church. Do I even have to tell you that it was a middle of the night baptism? 3 a.m. to be more specific?
I got the message and sent my sister a text message asking her if there was any way she could come to Cincy on Friday for the baptism.
She called me back as I was walking out of church and told me she was just going to ask me to come to Charleston because the church she has been attending was going to do ocean baptisms on the following Sunday.
"Aha," thought I... Dave Workman did say "Go." So I flew to Folly Beach the following weekend to see my sister get baptized.
It was to be an early evening baptism service off Folly Beach. The church had gathered. They sang a few worship songs. The pastor read some passages on baptism. He introduced those about to be baptized. Then he pointed out the storm brewing behind us, and said we better get about "the Father's business" in a hurry because the sky was about to let loose. He headed off into the water. Here is a picture of my sister heading toward the water: 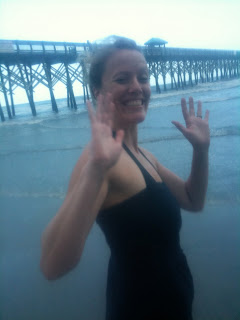 The MINUTE she stepped into the water, here is what happened:
My brother-in-law, Eric, and his live action coverage:
The life guards and the oncoming storm had us all scurrying in separate directions, toward shelter. When we found everyone, we found out they were going to have to reschedule the baptism for 2 weeks later.
I was seriously bummed.
Jennie asked me to baptize her. Again.
"Aha," thought I... Dave Workman did say "Go... baptizing them."
My hub, who had been following the whole thing through my text messages, called me. I think I had left him somewhere with Jennie walking down to the water, so he was understandably anxious to hear that she came up out of the water at some point. Anyway, he said if anybody has been a pastor to my sister, it's been me, so I should dunk her.
I also liked how Eric summed it all up, by saying that it couldn't be any more obvious that this was the way it was supposed to happen.
So we walked along the beach toward clearer skies, past the life guards' boundaries, and headed back into the water. Jennie's baptism, take II:
And here is the video of the baptism:
Did I mention that, in the end, the storm was all bark and no bite? It did look seriously ominous, I'm not gonna lie. But all we got hit with, was a wee bit of drizzle.
Here we are, my recently dunked sister, Charlie Brown, and me: 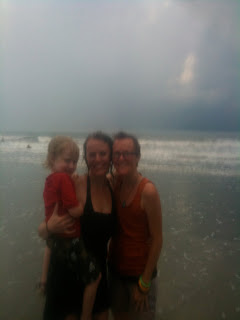 Eric, Charlie Brown, and my sister (also note the tiny speck of sunshine getting ready to burst through the clouds and make a clean slate of the sky): 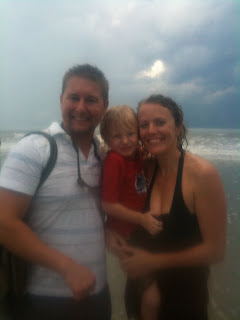 After the dunking it was time to drip dry, so we went, soaking wet to a little beach bistro to celebrate. We had them uncork a bottle of red wine, which we thought paired well with irony. 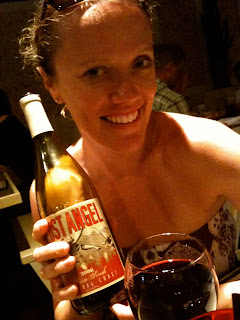 And we all signed the cork, as a token of remembrance (Luke 15): 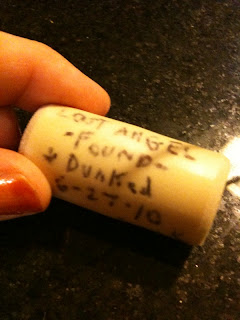 I'm so glad I flew to Folly this past weekend. What a crazy blessing that I got to go and baptize my own sister!
Posted by Joules Evans at 9:02 PM

As I read and watched this blessing, I cried all the way through.
Bless both of you and your families. I love you all.

You made me cry into my coffee. I love you. I have a baby sister who is my special one, too. :) I'm so glad you grabbed the opportunity and didn't stand on ceremony.

Hi Julie! Was thinking about you! Glad you are doing well! You and your sister are cool... :)

Thanks so much for sharing this blessing with us, Julie! Awesome!