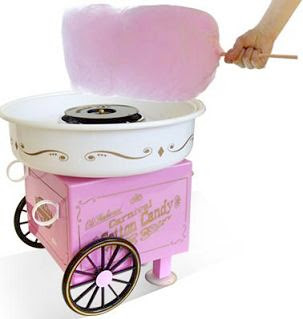 This August has been like pink cotton candy. It has been on the tip of my blog's tongue many times. But then it melts, seeps into my bloodstream giving me that sugar buzz, leaving little traces of itself in the sweet aftertaste.
Yesterday was my D-day. Two years ago my breast surgeon said the C-word to me. I've heard that sometimes one's life flashes before their eyes when they face death. That wasn't my experience. Not with the cancer, the chemo, or the "Vespa Incident". (I'm not sure which was the closer call, but the latter one sure felt like it.) My Redheads were huddled around the phone with me when we got "the call" and that effing C-word practically broke their hearts. They all fell to the ground in three separate piles under the weight of that word. I didn't have time to watch a movie of my life. All I could think about was that I desperately needed 3 laps and 6 arms. This was my life, live and in real time, right before my very eyes.
I know that last paragraph about the C-word appears to be a non sequitur to the cotton candy appetizer but that is just an optical illusion. Call me crazy, but don't both cotton and candy begin with C? So really, it is quite the brilliant segue if you don't try to think about it too hard but just let it melt and go sub-cranial.
And anyway, hearing the C-word may sound like a good time to start counting down one's days but for me it was more of a reset. It was my inciting incident. Yeah, I practically died when I heard that word. It did almost literally try and kill me. And I'm told I could have died, if I hadn't found the damn spots when I did. (Let this be my little PSA to everyone reading this: I don't mean to get all pornographic or anything, but to all my sistahs out there, you know what to do. And husbands, go to second base with your wives. 'Nuff said.) 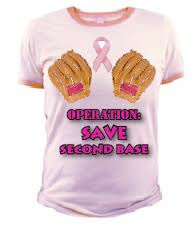 When the C-word messed with my kids I said F the C-word.
When the C-word threatened their Mum with "Game Over" my Redheads, who know a thing or two about video games, pressed Reset. You know how when you're playing Chutes and Ladders, and someone lands on a slide and they groan? To me this game is counter-intuitive and just plain backwards. Slides are way more fun than ladders. I personally think the blue ribbon belongs on square 1.
And that's where I landed when my kids pressed Reset. I started over, and started counting up.
Today is #731.
The first year of cancer and chemo was a bitch, not gonna lie. Two weeks after my mastectomy I did the Cincy Race for the Cure and picked up a pink survivor bracelet at one of the booths. I wore that bracelet out by my one-year anniversary of being cancer free. At which point I panicked. What did it mean if you broke your survivor bracelet?! At which point a friend gave me another one and I went "Whew."
The second year of my remaining chemo was more like a pain in the ass. It definitely channeled the whole terrible two's vibe. I wore out my second survivor bracelet by July 27th. At which point I decided, "This is a fun game!" 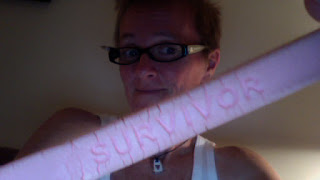 I am currently minus a pink bracelet, but the 2010 Cincinnati Race for the Cure is just around the corner, so I hope to pick another one up there. It's September 25th. If you'd like to come walk with me, here's the link to my page to sign up for my team, Shaken Not Stirred.
We used to be Team Evanshire, but we changed the name to the title of my book. 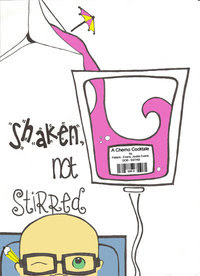 The amazingly talented London Glover gets the credit for turning me into a cartoon. She's got mad skills.
Recently, we did a live trailer of the book at my favorite little coffee shop. We decided that since Mikey won't be here when I finish the book and start trying to get it published, that we would go ahead and do a bookreading bash before he leaves for his Germany and Beyond YWAM Mission Trip. (Which is in 11 days, but don't get me started on that rabbit trail of my tears. You can follow his adventures by following his blog which is under my blogspring sidebar.)
It was one of the best nights of my life. Sweeter than cotton candy.
Amanda Michele Freaking Evans and her newly formed band (of her brothers), The Kicked in Fence, debuted and released their first EP, The Cheesin' Moon. 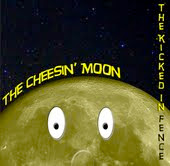 The Kicked in Fence knocked their debut performance out of the park.
Then Amanda and Mikey did a mini-set, and Mikey spoke a bit about his mission trip.
We had about 65-75 friends who came to share the amazing evening with us. It always humbles us that we have the coolest circle of friends in the whole world. I don't care if it's cheesy but it makes our world go around.
I stood up and spoke about how I had found the lump in my breast 2 years ago that night and asked all my fellow survivors to stand up. I told them about an organization that's close to my heart. It's called Stand Up To Cancer. It's goal is simple: the end of cancer. SU2C funds cutting edge cancer research toward that goal. This kind of research saved my life. The kind of cancer I had used to be fatal, period. Until Dr. Dennis Slamon developed Herceptin. There are many researchers like Dr. Slamon out there, closing in on a cure for cancer. SU2C helps fund them so they can put an end to cancer.
SU2C has a tv special coming up on September 10th. I remember watching the 2008 special a month after I got diagnosed. I've been understandably attached to them ever since.
For this year's special, they issued a video challenge. Dave Stewart wrote a song called "Up To You" and invited people to remake the song and upload it to the SU2C YouTube site for a contest. The winning video will be shown on the Sept. 10th SU2C special.
So Amanda invited all our friends to write SU2C on their hands and stand up to cancer with us for her video entry. All I can say is that I am so glad I was filming because I was nearly undone by the sight of all my friends standing up, waving their high five with SU2C written on their palms.
Then The Kicked in Fence and I interwove songs that inspired my book with readings from my book.
They wrapped things up with "The Chemo Cocktail" or more famously known as, "The Cancer is a Bitch" song. If you haven't caught that one yet, you can find an old version she did at my one-year-cancer-free anniversary here.
It was a ridiculous crazy fun night.
Tonight's going to be another one. The Kicked in Fence will be playing at Book Bums in West Chester at 7 p.m. Feel free to come crash the party. The door will be open, so you don't have to kick it in.
It will be sweet. August isn't over yet!
Posted by Joules Evans at 9:11 AM

You're such a good writer and I love August too. It's my birthday month!

It is a blessing to have your enthusiasm, humor, gumption, spirit, and joie de vivre coming through
cyberspace. You. Are. Contagious. Infectious. With cotton candy sweetness. Go Pink!