Here's a new and improved photo of me, since The Mouth of Truth broke my face, just to hopefully erase previous images from everyone's minds. 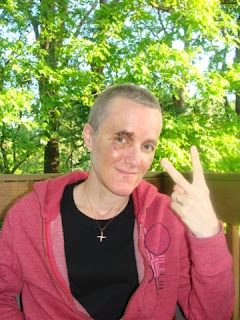 Here's where I hit. We think I may have flown off the Vespa and into the bars. (This is not a picture of the day of the accident, but just a view from Google Earth.) We were just across the street from this courtyard of The Church of Santa Maria in Cosmedin, where The Mouth of Truth is. This was our second (and foiled) attempt at sticking our hands in the famous monument's mouth. The first time we got to see it behind the bars, but it was after hours and locked up. The second time was less successful. I was driving. We were just across the street. At a complete stop. I was just accelerating enough to cross the street and park the Vespa where the other Vespas are parked in the picture, although there were more Vespas and a Smart Car out front when I hit the scene. Once I crossed I found the Vespa wasn't going to take the turn to park, so I was just going to stop and walk it over to a spot. I remember Dave telling me to brake, and I was totally trying to brake. I was not braced for impact because I was squeezing the brake and was shocked when my nose was hurting. That is all I remember. Thankfully. Dave was holding on to the seat and says I disappeared from in front of him and ended up on the ground under the front wheel, so he assumes I flew over the handlebars on impact and into the bars. I have no idea. I was so confused what was going on and with Dave telling me to hold his handkerchief over my eye, that I asked him to take a picture so I could see what was going on with my face. Thank God I had on a helmet. 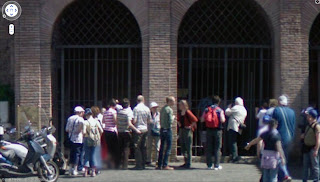 Here is the scene we were trying to recreate, instead of the one we made. It is from Roman Holiday with Audrey Hepburn and Gregory Peck. In it, he tells her of the legend that if you stick your hand in The Mouth of Truth and tell a lie, it will bite it off. This is a fantastic movie scene, because she had no idea he was going to pull out his arm with his hand hidden in his jacket, so her surprise is genuine and so lovely. Alas, my scene was not so lovely, and I still didn't get to stick my hand in The Mouth of Truth. I wonder if it was trying to tell me something. Double rejection and all. 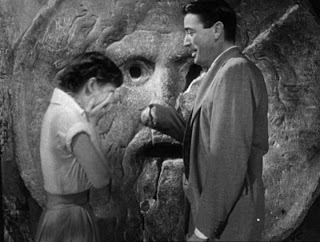 Anyway, so now there is another Redo on my list: To have another go at sticking my hand in the Mouth of Truth. Third time's the charm, right? So let's hope the coins I threw in the Trevi Fountain work, and bring me back to Rome someday. The other is to go back to Paris and walk up the Eiffel Tower instead of riding the elevator.

I had a wonderful and especially grateful Mother's Day. We went to P. F. Changs for our fam fave dinner, and then to see The Soloist, which was such a beautiful movie. I love dinner and a movie, especially with my redheads. And I was determined to live it up and eat popcorn during it, even if it was one kernel at a time. It was still delish, even in slow-mo.

At Changs, we ran into some friends who came over to our table after their meal and said they thought they might've gotten my fortune. It said, "Sometimes traveling to a new place leads to great transformation."

Well, I guess that's one way of looking at my crash landing of my Roman Holiday!

Salute and ciao, and please keep praying. So far we've been getting good news about all the many doctor visits: Oncologist, ENT, dentist, Oral/Facial Surgeon/ENT. I got the stitches out yesterday, which was not any fun at all, but I am glad they are out and that getting them out is behind me. Tomorrow I have another CAT scan in re: my right eye, to make sure the bones that support my eye are intact and structurally sound. My ENT said he has a hunch things are good, but wants more detailed pics of the specific area to verify.

I can't exactly get out on the tennis courts yet, which is SO FRUSTRATING, but I did take a 4 mile walk with a friend today, and that felt really good. Just hoping tennis is still in my future. Where can I get a fortune cookie that says that? ;)
Posted by Joules Evans at 7:46 PM

Hey there Julie! Looking much better in this new pic, I must say. You heal fast! I would like to go back to Paris as well and actually go up in the Eiffel Tower by either stairs or elevator...instead of just standing under it, which is all Mom and I did. Shall we make it a date? :)
Chris

Your bruises look much better, but not too good over your eye. Looks like you are healing pretty well--hopefully the CT Scan will be good news for you. You always were so dramatic, Julie! Thanks for the Mexican dinner & the little tour of Rome. Cheryl, Barb, & I really were glad to actually see you after
the little incident on the moped. I guess I had to actually see for myself that you are okay! You have been through way to much in the last year. Love to you all, your Mom

Hey there...you look so much better than you did when we saw you over the weekend! Thank you again for the dinner and trip to Rome. It was relaxing and delicious!
I am impressed that you used my saying that the Mouth of Truth wasn't meant to be a drive-thru!! Thanks for thinking it was "blog worthy"!!
Hope you and Dave are both mending quickly.
Love to both of you and the redheads!!
XOXOXOXOXO

Wow, Julie, you do heal well! Do you know the results of the facial scan on Wed?
I say we custom design a fortune cookie with the fortune of your choice. We could make a tiny hole in the cookie and take out the fortune with tweezers and insert a homemade fortune! Is that cheating?
Please send a new pic when things are normal. Chuck hopes you don't forget what "normal" feels like. (Tho he says he no longer remembers.)
Becky and Chuck E

Julie, you amaze me. How do you come through such a wreck and still look so darn cute? Love the title of this blog entry.