So Day 4 was basically a wild goose chase, chased with a fun but fruitless hike. The wild goose we were chasing was a travel agent to book a train to Florence. All roads may lead to Rome, but we couldn't find one leading to a travel agent. And the one lead we had from our B&B ended up being a dead end--it had closed 20, that's right, TWENTY years ago. The internet roads definitely haven't been paved over here.

The Appian Way, on the other hand, is paved, and a little less antica e rustica and more like Frogger than I had conjured up in my overactive imagination. We played dodge, I mean, hiked outside the city walls and along the Appian Way to the Catacombs, just in time for them to close. So we hiked back. Which isn't as bad as it sounds because it was still an adventure and still a really good hike. We totally earned our Gelato that day.

We went back to the Catacombs on Day 5. Took a taxi. And toured the Catacombs of St. Domatilla. There are over 150,000 Christians buried in those Catacombs alone. Sacred and inspiring like the Colosseum. 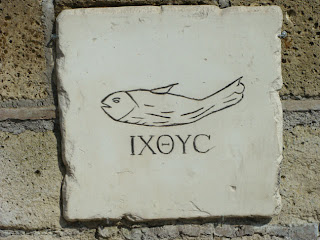 After touring the Catacombs, we took a taxi back into the city and then took a walk along the Tiber and into Trastevere, the Greenwich Village of Rome. After chasing down a pizzaria that only existed in a guidebook, we found our own little find of a pizzaria, that had the best pizza I've ever had in my life. Plus the Rome Masters Tennis on TV to boot. We got to watch Djokovic play Del Potro. We met some Americans from New York, who were visiting their daughter who is going to school here to be a geneticist, which was so cool. She is actually quite up on and interested in breast cancer research, which is even cooler.

Speaking of, one thing that I have noticed here, is that I don't notice my haircut sticking out or saying I'm sick at all. In fact, I have been nearly ploughed over a number of times. Yesterday, a guy mistook me for a giant and came tilting at me with a sword in his backpack on his way to catch a train. No joke. Even drew a bit of blood. I doubt it will leave a scar, but that would be a cool battle wound to take back with me.

I think besides being a tour guide, I might like living someplace cool and keeping a guidebook up-to-date as well.

Day 6 we took a train to Florence and did a fantastic Dante tour. There are various plaques throughout the city with phrases from The Divine Comedy, and we had a great guide who took us around and connected the literature with the sites and the history. It was such a blast. I had my camera in one hand and one of my copies of Dante in the other, and I couldn't have been happier. There is also a Dante museum, which we toured. Outside, there was a guy reciting Inferno en Italiano. To be able to understand it in Italian. Maybe someday.... We also toured The Church of Dante, which was really Beatrice's church and not Dante's. But that was cool. There were a couple of baskets full of letters to Beatrice, beseeching her help in matters of unrequited love and such. 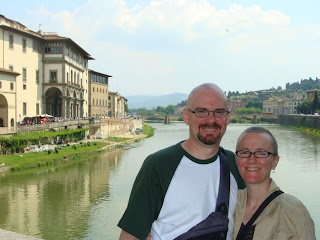 Here is a pic of Dave and me, standing on Ponte Vecchio, the bridge crossing over the Arno in Florence. It is supposedly a famous place where people have a wedding picture taken. In fact, right before us, a bride and groom had their's taken. Seemed an appropriate photo op for us, as well, since we are here celebrating our 20th anniversary a wee bit delayed. Or our 22nd a tad early. Whichever way you want to look at it. Either way our road led to Rome and how cool is that?! One guy here told us that when you are married for 20 years in Italy, they give you a diploma. We don't know if that is unreliable like guidebooks or not, but it sounds like a cool idea.
Posted by Joules Evans at 4:46 AM

I was so excited to see you had returned to the blogging! I felt like MY tourguide had deserted ME! It all sounds fascinating...you are blessed to be able to experience the history and beauty with the person you chose to travel through life with!! Is Dave still planning on the "Harley experience" for your future?! I say go for it....you deserve it!!

So people can ride around with swords sticking out of backpacks?! Where'd you get cut?
I hate when I'm traveling and set my heart on a place I just have to go to, only to realize it's long gone. Maybe when I grow up I'll join you as a tour guide someplace wonderful! Sounds fun to me.
Chris

so mom went to rome and went to heaven..in a dante tour :D i can so picture you and your excitement at that. it's cute image :)

love the pic of you guys!!