This is Dave, filling in for Julie. Monday was our last full day in Rome. It started out slow and relaxing, and ended with Julie in the ER! We had pretty much seen and done all the main things on our list, so the plan was to spend this day scooting around town on our Vespa and seeing whatever we came across. We toured the Pantheon, which was very old and very cool. It has huge dome (our capitol building was modeled after it), with a large round opening at the top. The rain pours through this opening and drains through holes in the marble floor. Raphael is buried there. To me, the really cool thing is that even though they still call it the Pantheon, where many "gods" were worshipped, it has actually been an active Christian church for 1400 years! 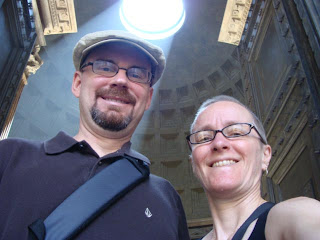 We visited Piazza Navona which was very nice with a fountain and lots of artists selling their paintings. Julie identified several rooms with terraces overlooking the piazza. We'll keep these in mind for places to stay when we return. 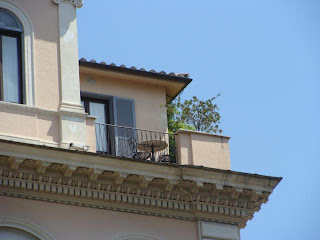 And then, about 3:00 in the afternoon we hit a wall... literally! Julie was driving the Vespa and handling it very well, better than me actually. We were stopped in front of the Mouth of Truth trying to make a u-turn and park. When we started to make the turn to the left the scooter couldn't turn sharp enough to avoid hitting a car parked on the side of the road, so Julie corrected to the right to go in front of the car and up onto the sidewalk. She was trying to squeeze the brake but it didn't work and we crashed into the wall and gate that houses the Mouth of Truth. I think Julie went over the handle bars and unfortunately she got the worst of it. Her face hit either the bars or the wall, she got a bad laceration over her right eye, I think from her glasses pressing in, cuts on her nose, lips and chin, and other scrapes and bruises elsewhere on her body. We were wearing helmets but they didn't have visors. If it hadn't been for the helmets, well, I don't want to think about that. There was so much blood all over her face and my hands as I tried to help her. So scary and sad to see my poor wife like that. I had a handkerchief and applied pressure to the cut right away. Two English speaking tourists came to help, one a doctor and the other a nurse, and someone called an ambulance which arrived quickly. She never lost consciousness but doesn't remember some things. She wanted me to take a picture for the record. There's a link to it at the end of this sentence, but I warn you it's pretty graphic, so if you get squeemish at the sight of blood just keep reading and don't click here.

I was holding on to the bars under the seat and pretty much stayed with the bike. I fared much better and came away with only a chipped tooth, some bruises and scrapes, and a sore knee, wrist, and Adam's apple. I just wish I could have borne the brunt of it rather than Julie; the poor girl's been through so much already.

I rode with Julie in the ambulance. She got 5 stitches over her eye and two in her chin. They did several tests (x-ray, cat scan, EKG, ultrasound, and blood tests). The doctors and nurses didn't speak much English, and it was very confusing and frustrating trying to figure out what was going on. Thankfully, our friend Juliet came to the rescue and was able to act as translator. If we understood correctly, she has a broken nose and maybe a broken cheek bone and jaw. After the ER they admitted her and took her to a room with 3 other ladies for "observation". After several hours no one had checked on her and she wasn't hooked up to any monitors. Around 9:30 they told me I had to leave and couldn't stay in the room or anywhere in the hospital over night. Juliet tried to plead with them but they were insistent. There was no way I was going to leave her alone there so we told them if I can't stay then we're both leaving. I spoke with my mom (a nurse) and she told me how to monitor Julie for any problems. We figured it was better for her to be with me in the hotel than alone an unattended in their hospital. Juliet helped us get back to the B&B, get some medical supplies and she took care of getting the Vespa back to the rental place - she was an angel!

The Rest of the Story

Well, we made it home safely. For the long flight we were blessed to move to a row with four empty seats, so Julie was able to stretch out and sleep most of the way. Here's a picture of her in the Atlanta airport. The kids met us at the airport in Cincinnati and we had a happy reunion. They were sad to see their mum so banged up, but we were all happy to be back together. It was Cinco de Mayo but no one was in the mood for Mexican food, so we picked up PF Changs and decided to celebrate Chinco de Mayo instead.

You might be wondering if this tragedy ruined our vacation. It was certainly not the way we wanted it to end, but we both agree it didn't ruin it. We had a wonderful time together, saw so many amazing and beautiful sights, and ate some of the most delicious food we have ever tasted. More than all that, we really reconnected with each other, laughing and playing and enjoying life together. We accept good things from God and harder providences, too, thankful that the many blessings far outweigh and outnumber the hardships.

Julie had posted earlier about an old Italian man who told us that in Italy when you've been married 20 years they give a diploma. The kids picked up on this and made a diploma for us. 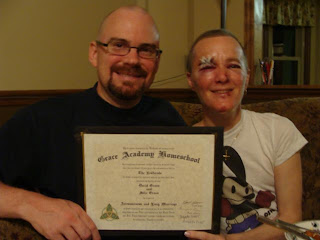 Blessings to you all,
Dave & Julie
Posted by Joules Evans at 6:29 AM

Oh, I am so sorry. I can hardly recognize you Julie! I am so happy to hear that you all had such an incredible time, prior to the vespa tragedy, though. Miss you guys!

I am just glad you are both home safe & sound! I am not sure I was prepared to see the pictures of you after your little encounter with the WALL! I said some prayers for you both & hope you will have a quick recovery from all the trauma you have endured. Love you, your Mom

Aphid! I'm so glad you and Julie are home safe...the pictures broke my heart! But reading about the time you had reconnecting, playing, eating, and having a wonderful time did my heart good. If you want travel buddies for the next trip, I'm game!
Love you all!
Ris

So sorry about the Roman crash on your anniversary holiday! Grateful you were wearing helmets - it could have been so much worse. You'll be able to laugh about this down the road a bit. I'm glad to hear that the rest of the trip was an amazing and dream-like. Still can't believe you saw Rapha beat Djokavic.

Praying that Port Rapha was in working condition today and that all went well with your treatment. You've been in my prayers!
Much love, Wendy

Well this story and pictures have just about broken my heart. I can't believe this happened after all you've both been through. I've been praying since I heard and am hoping the port is okay. I'm glad you had such a good time..I know you must have both needed this trip a lot. Can't wait to hear all the details in person. Love you

I now understand what painting the city red is all about. Excellent work and great attidue on the scooter wipe out. I have had a few of those myself.

Oh my goodness! JULIE! I know you're okay, but what a way to end your vacay! I'm so sorry you guys went through that. Hopefully it will just be a footnote on your lovely time in Rome:) Next time--no motorcycles! Promise?