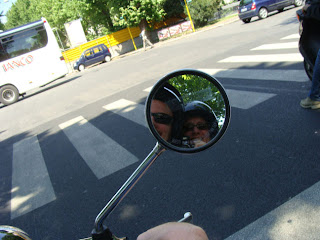 Looking in the rear view mirror of Day 7, we totally had a Vespa with a view! Now it has really been a true Roman Holiday, that we have bopped about on a Vespa! Although I haven't given her a go yet. I'm not sure if I'm crazy enough to enter the Roman road race. Seriously, you have to be certified if when in Rome you try do drive as the Romans do. Lanes? What lanes?

We rented a Vespa and drove it to the ATP Rome Masters Final yesterday. Rafael Nadal defeated Novac Djokovic 7-6, 6-3 in an uberly fabulous match. They both played so well; and they are two of the most fun personalities to watch. Rafa is such a grinder and Novac is so animated. I love both of them, but was rooting for Rafa since he is the king of clay, and I wanted to see him win on his surface. Plus, Rome was the only clay tournament he lost last year and I wanted him to regain it. (Djokovic won it last year, so it couldn't have been a more perfect finals to get to watch.) 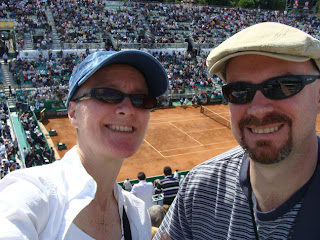 I did take quite a few pictures, but here is the victory shot. RAFA vamosed! Woot! 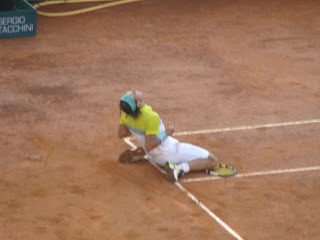 i didn't realize you had updated so much.. i got to read three new blogs :D and now i will comment them all!

Is an "uberly" fantastic match anything like an "utterly" fantastic match?!
Love the Vespa pic!!! I have been telling Bill that I really NEED one for the past 2 months! We saw one at Sam's Club (Pearl white) and it instant LOVE!
You both look great....don't forget to catch the flight home!!
Much love!

Sounds like you have had a wonderful Roman Holiday!! I have loved reading your blogs and seeing the pictures you have posted & am glad you both had hats on at the tennis match so you don't get too sunburned. Just talked to you before I came to print your blog at the library and am hoping you are really okay after the little scooter accident!!
I will say some prayers for a safe trip home for you both. Love you both, Your Mom