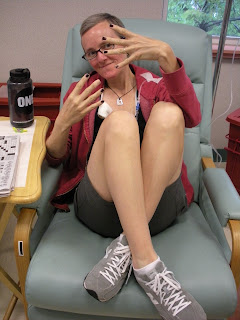 Slammed another chemo cocktail down today. Here is me, demonstrating the number 8 in my chemo blue recliner. I chose to use the double 4's because 1) I like symmetry, 2) it's almost Dave's and my age, 3) it's a good roll in craps, and 4) I didn't want to have to deal with the whole competition issue over which hand would be 5 and which one would be 3. I really had other things to deal with today than such "hand to hand" combat. For instance, a few minutes after Dave snapped this picture, I decided to recline my chemo blue recliner back, and pulled the handle right off. I didn't know I still had some latent superpowers left from being radioactive, and you can imagine how I felt almost blowing my cover like that. I shudder to think what could've happened if I hadn't had the foresight to choose the double 4's, and say the reclining hand was feeling all prideful, or worse, jealous.

Anyway, they got a new flatscreen TV in the chemo room. This presented another issue I had to deal with. And by issue, I mean Dave. See, the old TV was just a box, not really any controls to adjust other than the channel and the volume. The new flatscreen, however, is widescreen, which means there is a remote with all kinds of settings to adjust and buttons to push. Besides counting the drips in my IV, Dave likes push buttons and adjust the proper screen ratio and what-not on a widescreen. 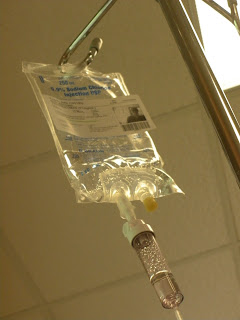 It's like I knew what he was going to say even before he said, "Doesn't it bother you the way its all stretched out on the screen?"

"We don't have the remote," I countered, knowing I had totally check-mated him. 1) I was hooked up and couldn't go ask for the remote. 2) It didn't really bother me if the french fries Rachel Ray was making looked bloated. 3) Dave was also sitting in a recliner, which meant he was not going to be getting up soon to go find a remote.

Luckily, there was a newspaper somebody kindly left in the chemo room, and I thought quick, and turned to the crossword puzzle section and distracted him. There were two crosswords, one easy and one advanced. I am still trying to process what it means that we finished the advanced one twice as quick as the easy one. 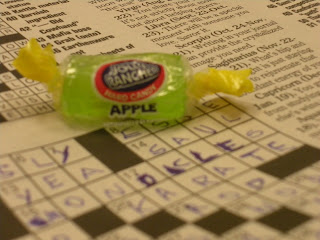 The lady across from me asked for a single malt hooked up into her cocktail. Her nurse didn't catch the reference, so I said, "She wants some Scotch." And Dave decided he could probably do a pretty good business, opening up a bar in the chemo room. Everybody is a comedian.

While I was there, one lady and her hub were getting the tour from my oncologist's nurse; it was her first chemo. I remember that tour last September 29th, on my first chemo day. And there was another lady there getting her last chemo. I totally hi-fived her as I left. Only 7 more for me. God willing I will be slamming down my last one on December 21. I just found it interesting to think about as I sat not literally between them, but metaphorically so.

Also, there was another lady named Julie, in with me today. We have seen each other before, but chatted quite a bit today. She had breast cancer 6 years ago. Then was cancer free for 6 years. Then it came back, in her sternum, I think. She is also on Herceptin this time, so we were doing the same shot. But she is also on a couple others as well. And she told me she will be for the rest of her life. Sobering as I sat there feeling so happy about counting down my treatments and getting this port removed. If you think about praying for her when you pray for me, since her name is Julie, too, and you could just add an s to make it easy, and that would be cool with me.

I didn't have to do the steroid drip today, so once I was hooked up, it was just the 90 minute Herceptin drip. I am so used to it meandering through my whole Monday, that it did startle me when she said I was done and we'd barely begun the Sodoku puzzle. (Yes, we do Sodoku, too.) Not that I'm complaining! I think we were home by 3. Just in time to go watch Mikey's tennis match. (His team won.) First time I did not come home and immediately crash after chemo.

My counts were all in range this time. No red flags at all. Usually I have a white blood cell count flag and maybe a couple others. None have them have been bad out of range, just little flags waving out a hello, just to make sure all keeps going well. And, so far, thank God, it has.

My oncologist checked out a couple of knots that have been under my arms and making us eager to see her to have them checked out. She said they were probably folliculitis, which as far as I understand it, is an infected hair follicle or something like that. Nothing to worry about. It will probably go down and away. And we'll just keep an eye on it, and if it happens to get bigger, she'll biopsy.

I appreciate all the prayers that continue to lift me up, and all the encouragement that continues to rain down on me. It's means more than I can say. I am humbled, and grateful beyond words.

P.S. I don't know if you noticed in the top photo, but I got a haircut last week. Not too much different, but it was getting a wee bit tufty at the top (as in, I was beginning to look like a rooster when I woke up in the morning, and this, quite frankly, scared me. 1) Who wants to get up when a rooster gets up? and 2) I didn't feel like looking like a rooster, let alone getting up like one). So I got a shave (my neck) and a haircut (the tuft). Here's the thing: Up until I saw my hair sitting on the floor in a little clump, I had been in a state of indecision as to what color my hair was coming back in as. Gray. So much for my dirty dishwater blonde. So much for the white I thought I was inheriting from my Gigi, which looked like I highlighted my dirty dishwater blonde hair. It's gray now. Salt and Pepper is what I'd call it if it were a crayon in my crayon box. Anyway, at least I don't look like an old gray rooster anymore. That's something.
Posted by Joules Evans at 11:58 PM

You are looking so good and I think salt and pepper is a very good color. I'll be adding that "s" and always Love you.

Very entertaining blog, Julie. Your hair definitely doesn't look grey to me and your certainly aren't an old rooster. If you ever want some company in the chemo room, I'd love to go again. AND.....when are we going to play???

You had me giggling all through this blog - especially with Dave and the TV! I hate that stretchy look too but, unlike him, don't really know how to fix it. Bloated french fries are o.k. though, since I love fries and the bigger, the better!
I'm so glad you are better and counting down the cocktails.
Chris

Love to read your blog,Julie--you are so great at putting your thoughts into words. I am always amazed at you! With your strength & all you have dealt with in the past year. I am in awe of you, even though I did give birth to you. You are always in my prayers and I will be sure to put the "s" on for both the Julie's. Love you
lots, Your Mom XOXO

Hi Julie,
The quirky twists and turns in your blog keeps me on my toes, chuckling as I read. How does your brain come up with all those clever ideas? (must be the chemo :)
Your hair reminds me of Julie Andrews in "Sound of Music." I like it!
Praying for the Julies (that'd be two)
Becky

Hey Jules,
So glad we could go out and celebrate another chemo cocktail down - not to mention a few glasses of wine! I'd venture to say that your leftover "superpowers" may have had something to do with your Yahtzee win - as well as the fact that my glass of wine "somehow" was always full - even though I was drinking it!) I can see the winning tactics written on the wall of my competitive mind (that, by the way, is always in need of grace!). What fun it was to spend such focused, uninterrupted time together.

Humbled and amazed by your strength in the journey. Praise be to God for His faithfulness and answers to prayer!

Great Blog! I have added you to my blogroll, “Cancer Blog Links” with over 350 other cancer blogs at www.beingcancer.net, a cancer networking site featuring a cancer book club, guest blogs, cancer resources and more. Please stop by and visit. If you like the site, please consider adding Being Cancer to your blogroll.
Take care, Dennis

I heard you used your SuperPowers to knock Joanne Chappel out of the Windwood Tourney. Congrats! I demand a singles match!

Hey, Julie, check out my blog! Glad you are on the downhill slide of the countdown! When can we go for a walk now that I'm doing better?