I'd Blog But I'm Busy Washing My Hair 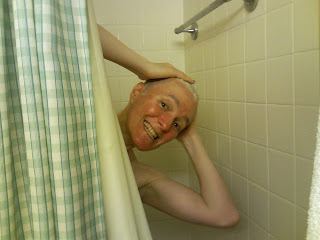 You'd get excited too, if your shampoo bottle had been just sitting there since October, making you feel like you don't care or something. I kept trying to cheer it up during its lonely months on the shelf. I told it, over and over again, that it shouldn't take these things personally. I told it I totally thought of it as "half-full"; but the truth is, it's been a melancholy bottle of shampoo, and I'm just going to say it: Pessimistic. It's not like I didn't already have my hands full, dealing with my hairbrush, my razor, my tennis racket, my new tennis shoes...all clamoring for my attention.

Anyway, so Amanda and I are on a little getaway as I type this. It is her much deserved spring break, after completing her second quarter of college. We took a mini-road trip just south of the border, not to Mexico, but where the grass is blue. Still, it's a wee bit nearer the equator, and every little bit helps, if you ask me.

We have had our very own Audrey Hepburn movie marathon: Sabrina, Roman Holiday, Charade, Paris When It Sizzles, Funny Face, Breakfast at Tiffany's, My Fair Lady. Not to mention, The Audrey Hepburn Story. We don't think you can watch too many Audrey Hepburn movies; but, we have been doing other things too. We had lemon-sugar body scrubs and pedicures at the hotel spa.

Amanda had what I consider a what-are-you-thinking-?-the-P-in-spa-is-supposed-to-stand-for-pleasure-not-PAIN! spa experience, of having her armpits waxed. I have already gone into my theories on waxing on this blog before, when I had my eyebrows ripped off my face and then realized the chemo was going to make that pain profoundly unnecessary. More than that, it was going to be a rather redundant Act II. All I can say, is that if it weren't for the chemo, I'd swear that the rest of my eyebrows just furrowed and flew the brow after witnessing the waxing and "waning" of their kin. Anyway, so of course we videotaped the armpit waxing. It was her idea. But I'm glad we have the fun faces she made on video. Priceless. Worth the $25 I paid so Amanda doesn't have to shave for three weeks? Heck, I haven't shaved since September, so maybe I just felt a little bad for her, since that is one of the few "perks" of chemo. At least that's what everybody tells me. I've tried not to feel to boastful about it. And I think I pretty much just put to rest any smooth armpit superiority problem anybody had with me, shelling out $25 to share the smooth.

But I feel at this point I must be honest, and a bit vulnerable. My armpits are not exactly smooth anymore. I think we've all been distracted by the prodigious growth of peach fuzz on my head, to even know that my armpits were sprouting too. When Amanda started talking about getting her armpits waxed, I happened to go look in the mirror at my own armpits and was, quite frankly, shocked at the sight. I shaved right then and there. Of course, I hadn't packed my own razor, because -who would've thunk?- so I had to use Amanda's. I only mention that because I feel bad for my own razor. It has been waiting way more patiently than my shampoo.

And that brings me to why I haven't updated the blog. I'm sure you won't think it a lame excuse that I was busy washing my hair. That's why I posted the photo, so you wouldn't think I was making something up but not wanting to blog. Plus, I thought it couldn't hurt... maybe I'll get a shampoo commercial deal out of this. Anyway, I thought I had forgotten how to wash my hair, but it really was just like riding a bike. Although, I'm not positive I remember how to do that. But that's really beside the point, and maybe a bit too vulnerable, verging on TMI.

Let's just sum up at this point, and say that spring break is swell.

On the treatment front, no news is good news and pretty much boring news to blah blah blog about, but it's going. On Monday I downed Herceptin cocktail number 6, out of 17. Chipping away at it! Physical therapy is thankfully not exactly torture, although they do both start with T; but compared to waxing, not so much. We are trying to bring my right arm back into the game of life and hopefully someday, tennis. Lack of range of motion in my right shoulder from Port Rapha. And a pinched nerve shooting pain down my right arm. Thank you for keeping on praying because I seem to keep on needing it.

Cheers and love,
Joules
Posted by Joules Evans at 5:25 PM

Yho Julie,
What a risque shower pic! Sexy!
I like Audrey Hepburn too! I always wished I had a long slender neck like she has instead of the wide stubby neck I have. Ah, well.
These 'hairy' blogs are most hopeful compared to the hairless blogs of yesteryear. Love it!
Becky E

Love the photo shot. Very cool !
You are always in my prayers.
Love you
Auntie Carol

But the real question is:

Either way, the hair coming back is good.

Oh this is great!!

"Hairs to you, Julie!"....just a "short" toast to you and your hair in memory of GiGi, who always loved a "short glass", etc.!
Love you much!

The picture is priceless! Love your writing as usual. I'll keep praying for your arm and that you get to do the tennis thing soon. Love you

Great article and your blog template is so cool. Is this template free or not. If so, Where could i download this template? if not, how much does it cost? Thanks a lot!
By Air Jordan shoes

It is my pleasure to read your article! What a vivid photo it is! Thank you for sharing! good luck!

Good article! I visited many sites, only the clear expression in addition to the author's experience. Read your article, I learned a lot of knowledge. I solved many puzzling riddle. Thank you for your sharing.

html - lehenga saree
Good article, Each individual point is sufficient.Appreciate your sharing with us your wisdom.caiyifang/comment201110