Boo-boos, Bandaids, and the Big Scheme

In the big scheme of things I know a bandaid is not a really big deal. I had my 3-month check-up with my oncologist last week. It went well btw, despite all the bandaids that might as well have been "out of service" signs on all my veins that kept blowing during the blood draw. Which was the most confusing part, because with mi amore del vino tinto, who'd've expected my blood to just sit there, like an upside down bottle of Heinz (in the pre-squeeze bottle days) singing "Anticipation" like it's some kind of a comedian when it's really just a condiment. Anyway, after the first nurse struck out, we called in Fatima aka the pinch hitter if you know what I mean. And by that, I don't mean she's mean. But she can hit a vein and pinch a drop or two of blood in a pinch like nobody's business. I helped a little by hulking out the iguana veins in my hand just so she wouldn't be intimidated by all the holes in my arm, but I have to give her props. Even if she gave me boring bandaids. I guess they were out of the Sponge Bob bandaids. Whatever. I got over it. And my oncologist gave me two thumbs up at my appointment, followed up by a good report on the blood test. So you can see why I didn't feel like holding a grudge about the boring bandaids. 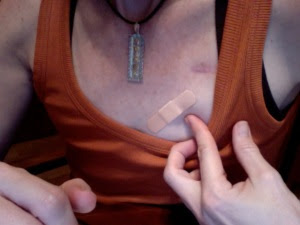 It's not the one I was talking about a second ago, but I just thought about it when I was talking about bandaids, and then I felt kind of bad for giving Fatima such a hard time about sticking a boring bandaid on me since it turns out I'm a freaking hypocrite and buy boring bandaids myself. (In my defense, they are cushioned, not to mention, water resistant, which has come in handy with all the rain this spring.) Anyway, this bandaid is from a biopsy I had done on Monday. There's another place on my right shoulder as well. I don't mention the biopsy out of worry. I almost didn't mention it at all. Not even to my oncologist because, no offense, but the idea of more doctor's appointments made me feel sick. Plus I'm super busy editing my book about my cancer story and I like the ending the way it is.

I have so many friends and family who are writing more chapters in their own cancer stories and honestly it breaks my heart right underneath that bandaid.

Like my friend Kristi, who I wrote about recently and pray for constantly.

Like when I walk out the door tomorrow. If I look to the left I'll think a friend's sister who is fighting ovarian cancer. Right next door, is a friend who just celebrated his own 5-year cancerversary, while grieving the forth anniversary of the passing of both his wife and daughter within a month of each other from two different cancers. Then I drive past the street of a tennis girlfriend who was fighting stage IV kidney cancer when I was just beginning my battle, but now she's resting in peace. On my way out of the neighborhood I pass another tennis girlfriend's house; she's fighting stage IV breast cancer.

Like my friend Vanessa who I get to work with a lot these days. She's one of the subjects of The SCAR Project exhibit who is working with me to bring the exhibit to Cincinnati in September. She was actually photographed twice for the exhibit. The first time, after she was diagnosed at only 25 years old. Then again, sadly, when the cancer metastasized almost but not quite three years later.

Which is just about the point I am in my journey. Which is why it's hard not to "go there" while I'm waiting on results from a biopsy from Monday, or having an MRI tomorrow (which is also nothing I'm worrying about, we're just keeping tabs on some issues I'm having, probably resulting from the "Vespa Incident." On top of chemo brain.)

I hate the way the lines blur when people I love are dealing with cancer and I end up thinking about myself and hoping my cancer doesn't come back. It makes me feel like a jerk.

Even though they're not sitting there thinking I'm a jerk because they're busy fighting cancer and hoping for a cure.

I think it's cool the way the lines blur between finishing treatment and being finished with cancer. I've been finished with treatment for a little over a year. I hope cancer is done with me. But I'm not done with cancer. I have a lot of peeps I love, too many peeps I love, who are still fighting cancer and hoping for a cure. Which is why this is not so much about my bandaid but a request for some prayer to cover all my peeps I mentioned underneath.