Turns Out Writing a Book Makes Your Bum Sore

Wow... it's been awhile since I've posted. So much has been happening. In case you're not on Facebook or Twitter with me (Friend me, Be my Tweetie) and don't know... I FINISHED THE FIRST DRAFT OF MY MANUSCRIPT! I'm making progress whipping this WIP into shape. (Superfun song btw.) Amanda did a first run through edit for typos and other glaring oopsies. Boy did she have revenge, I mean fun, taking the old red pencil to my papers;) Now I'm reading it aloud to myself to make sure it sounds right/flows right, and making some edits and revisions, misc. notes, and an index as I go. After that, I'll probably need an editor to have a look see, who can tell me what else needs to be done to polish it up for publishing.
As soon as I finished the last chapter and sent it off to my sister, we made plans the next day for me to come to Charleston to celebrate. She invited a bunch of her girlfriends over and we had a bookreading/not-a-chemo-cocktail party, which was SO MUCH FUN! So many new friends! 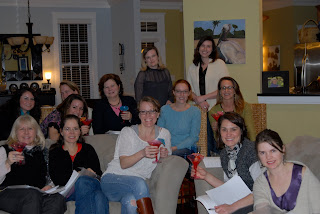 Jen and I made my famous, official, and shaken, of course, "Not-a-Chemo-Cocktail", which was somewhere between de-lish and yum-O. Someday I'll make one for Rachel Ray and see if it isn't so. Then Bobby Flay will want to do a throw down for my recipe, and I'll say "Whoa, whoa, whoa... I'd rather cook with ya than against ya, so how about sneaking me in to be a judge on an iron chef peanut butter and chocolate challenge?" Speaking of iron chef, I sure wouldn't mind if it was Cat Cora on deck because I've always wanted to toss back a shot of ouzo with her.
Anyway, I read a few chapters and did some Q&A. It's crazy to me how much fun I have doing it considering how shy I am inside. One super cool thing about this Charleston crew is that they are being my guinea pigs, I mean, doing a beta book club for me!
Here's me showing off the amazing cover artwork for my book: 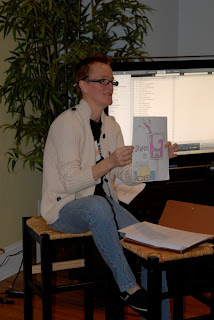 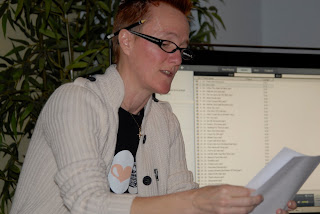 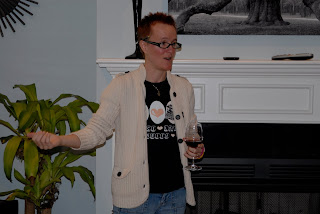 And so the editing/publishing adventures begin! Cheers to that, yeah?! Also, now that Spring is thinking about springing, let the running begin! I've registered a Team Shaken Not Stirred for the Indy Race for the Cure on April 16th. We're planning the Indy edition of my bookreading/not-a-chemo-cocktail party in conjunction with the Race. More details will follow. In the meantime, if you'd like to do the Indy Race with me,
1) click on Komen Indy
2) press the pink join a team button
3) type in the team name: Shaken Not Stirred
4) click on Team Shaken Not Stirred under the search results
5) press the pink join my team button
6) ta-freaking-da!
Today I have my 6-month check up with my breast surgeon, and Monday I have my 3-month check up with my oncologist. Please pray for the old two thumbs up from each of my docs.
Also, please pray for my Uncle Bill. He has stage 4 prostate cancer and is currently in the hospital, quite low on hemoglobin. Ever since his cancer came back with a vengeance, it has been such a ridiculously rough go. There's a lot I'd like to say about it. But I can't say much because of struggles they've had cutting through red tape out the freaking wazoo.
People who make/apply red tape do not seem to realize that bone cancer hurts like hell.
My Uncle Bill has been without chemo since July. Meanwhile he has been in terrible pain I can't even imagine. And the cancer has been growing.
He was on chemo, mainly to help with pain management. Up until July. After he was offered to take part in the third phase of a clinical trial, which wouldn't even have benefited him, but he signed up anyway, because he wanted to help others. This is where things get confusing with red tape and no more chemo.
A week or so ago, they finally got things sorted out and he was getting ready to go to chemo and he broke his foot getting out of bed. The doc said it was broken in 3 places and that it was the worst break he'd ever seen. He had surgery on the foot last week and isn't supposed to put any pressure on the foot, which makes getting around interesting. Worse, he isn't able to get chemo until it heals. Which takes 6-8 weeks.
A couple of days ago, he went straight from having his post-surgery check up for his foot to the ER to have tests for a potential blood clot before they casted him, and then kept him when they found his hemoglobin levels to be so low. There doesn't appear to be any blood clots. Next step is to scope to see if there is a bleeding ulcer? causing blood loss. Please pray for them to figure things out quickly. And for comfort and encouragement for my Uncle Bill, as he is in so much pain and is so understandably discouraged. Thank you.
Cheers and love,
Joules
Posted by Joules Evans at 12:16 AM

Fun cover. You have a good sense of humor. I suspect that goes a long way... (though it doesn't make your bum any less sore :)

Aww... thx, L.L.! And thx for introducing me to 1000 gifts! Anne reminds me of you. We've got a little book club coming up with it. Next on tap is God in the Yard. Booyah! Cheers and love:)

Loved your post. You are out there doing it—reading your story. I think I am about at the exact same stage as you with my memoir. We'll have to oompare notes. I'm reading a lot of "How to get an agent" stuff, but I remember you are thinking of self-publishing. I'm still trying to decide. I'm going to go find you on Facebook and check out your website now. Having fun.