The Mark of a Good Year

A year ago today I downed my last of 24 chemo cocktails. Time sure flies when you're not in a chemo fog. Also, when you're having fun. And I've been having the time of my life.
For instance, as my readers may know, I am in the process of a campaign to outlive as many pink survivor bracelets as I can. As of last Friday I've worn out three of them until they've fallen off my wrist.
I got the first one at my very first Race for the Cure in 2008 which I somehow did only 2 weeks after my double mastectomy. Back then I didn't even know if I technically qualified as a survivor since I was still under the influence of pain meds from the surgery and wasn't sure if I'd actually survived yet.
I wore that first pink bracelet out before the 2009 Race for the Cure. I have to be honest. At first, I panicked when it broke. I know this sounds crazy but a tiny part of me wondered if it might be a bad sign. I not only raced for for the Cure that year; I also raced to the pink bracelet booth to get a new survivor bracelet.
There was no panic involved when the next one broke. I was like, "Psh... is that all you've got?" when my second pink survivor bracelet didn't survive to accessorize my wrist for the 2010 Race for the Cure.
And in a super savvy move, I got two survivor bracelets at this year's Race. Part of me felt bad taking two. But I knew all of me would have felt way worse when it broke last Friday - after only three months - IF I didn't have the foresight to grab an extra.
Three months must be some kind of a world record. That's what I call living hard, in other words: the abundant life.
I'm glad I had another to put on right away when it broke the other night because my wrist feels naked without a survivor bracelet on it. Understandably I'm concerned about my sole surviving pink bracelet, since our next Race for the Cure 2011 is 9 months away. And no, taking it easy is not an option. Which is one of the reasons I'm planning to do a few other Race for the Cures across the country in 2011. This is still very much in the brainstorming stage, but you can follow the progress of Team Shaken Not Stirred's Race for the Cure at my web site.
So besides breaking out my back-up pink survivor bracelet, what did I do to mark the occasion of tossing out the old calendar that counted down my chemo cocktails? Look in the mirror. 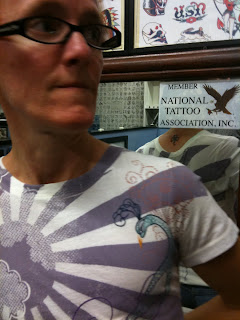 No, I wasn't trying to trick you into saying that I'm the fairest of them all. And no, I didn't join the National Tattoo Association, Inc. But I got a tattoo to literally mark the occasion. Most of the times I'm mostly a metaphorical kind of girl. Every once in a while I like to spice things up. This time, with three leaf clovers. 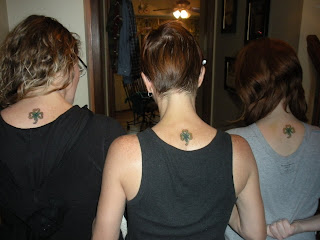 Amanda (above, to my right) has talked about getting a tattoo with me ever since I got cancer. I thought it was so cool that she wanted a permanent mark on her body as a sign of her love for me when I was feeling so very temporary. She first mentioned the idea of wanting to get a tattoo where my port was when it was being such a pain in my pec. That area still gives me issues, and isn't quite ready for a tattoo. Yet.
That Christmas she told my sister Jennie (above, to my left) about our tattoo idea and she immediately decided she was in. We decided that once the cancer and the chemo were in my rear view mirror, we'd all get a tattoo together. We've been talking about our tattoos for the past two years, trying to come up with the perfect design. Recently Amanda found a simple three leaf clover that all three of us felt was the one.
I liked the idea of a three leaf clover on a few levels.
The three leaves stand for the three of us, but also reminds me of the three in one of the Trinity: Father, Son, and Holy Ghost. Which is significant to me, not only because that is the beginning of what I believe, but also, our roots go back to County Cork, Ireland. So meanings go deep and are interwoven, like the celtic weave in the clover. Also, I like the color green. In Lord of the Rings it is a symbol of hope. It's also the color of my eyes. And tennis balls.
I know a four leaf clover is supposed to be the lucky one and all. But I say hang the rules. Why not switch it up a bit and spread the luck around?! Psalm 50:10 says that "the cattle on a thousand hills" are God's. Just imagine all the clovers that all those cows are chewing on all those hills all over the world. That's a whole lotta luck just waiting to be found if you ask me.
Why do we make things so hard?
Anyway, my lucky charm is a cool and constant reminder to me of how very lucky I am. If you don't believe me, check out this picture of me with my favorite band, Over the Rhine, taken at their Acoustic Soiree at St. Elizabeth's Cathedral this past Sunday. 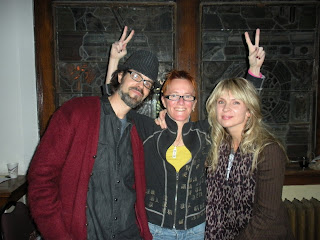 If you still don't believe me, check out the one from last year. 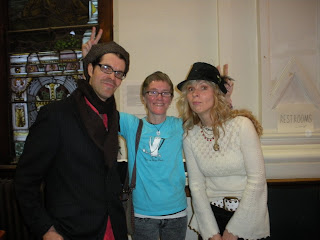 If you still don't believe me, how about the one from the year before that? 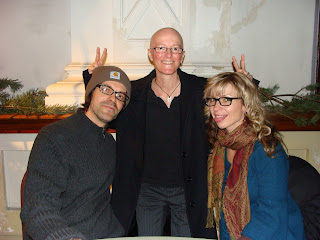 Yeah God! Yeah Joules! Great insights and outlook on your walk through the valley of the shadow... (Ps. 23) You bring inspiration and laughter to many. Keep on going and I pray you will have a garbage can full of pink bracelets!

I like your tat. I'm lucky to have you.

Lol, you are so funny Mrs. Evans, I love you! May Jesus bless you to the brim and overflowing!!!

Yeah, life can be downright cruel, but life is also a gift from God. I am so thrilled to see you understand that. Being diagnosed with cancer is one of the worst things to go through. My mother and sister were both diagnosed with cancer within one month. They have beat cancer! I am glad to see that you are keeping a smile on your face! That will help you win the fight! Thank you for sharing your story. It is truly inspiring.

My name is Gina Gonzalez, I came in here to let everyone know that CANCER is curable Dr. Iyabiye has the cure. My sister is one of the beneficiaries of his treatment/cure. Dr. Iyabiye cure cancer with natural recipe, he cured my sister and she's cancer free as I speak, you too can be cured don't let anyone talk you out of it if you are real in need of cure. Contact him for help through: Whatsapp: +2348072229413 call:+2348158577300 email: iyabiyehealinghome@gmail.com