Whoa... what just happened? It's so quiet here in the Evanshire, I can almost hear a pin drop. But for some reason that makes it hard to think. Used to the hubbub about me. So I strain to see if I can Name That Tune the pin makes when it drops.
Nothing.
So I get up and go start a load of laundry. I walk really loud just like Matt does to see if I can trick myself into thinking it's him stomping around. But I'm just too savvy to fall for it.
The washing machine's hum helps, but it's no Amanda Michele Freaking Evans. I cue the dishwasher to harmonize with the washing machine. Amanda can harmonize with herself, times 4. (Check out "The Butterfly Song".) Boom, roasted. It takes way more than two appliances to keep up with my little whirlwind, I mean, daughter. Though h
er wake, I mean, trail is much easier to spot than it is not to trip over.
But yeah, so my nest is relatively tidy today. The Redheads have all done cannonballs out of the Evanshire and are making splashes even as I type.
Mikey is safe and sound in Germany at the YWAM base. This is where he is living for the next 7 months. 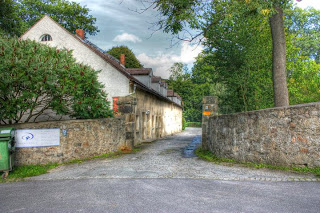 Kinda beautiful, yeah? Just beyond his building, which I think is mainly a guys' dorm, is the Castle. 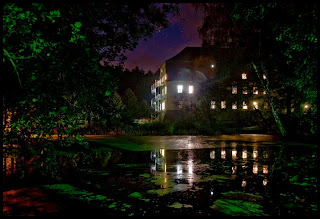 The Wifi is in the Castle, which is where keeping in touch with Mikey happens. Or should I say, where it will happen as he settles in and down enough from all the excitement and splashing around so that we can establish a more regular time to connect. We have gotten to Skype with him a few times, and can I just say thank God for Skype, not to mention Facebook?! 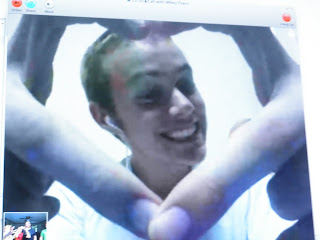 Basically, he's having the time of his life. On Monday when we were skyping, he told me, quite casually, that he was going to Switzerland on Saturday. I guess it's going to take a while for it to settle in for me, because it felt so ridiculous surreal hearing your son say something like that to you. Here is his latest blog post, which is the place to keep up with his YWAM adventures, if you'd like.
Meanwhile, we are all missing him like crazy. Here's Amanda's blog post about taking Mikey to the airport. I made a Mikey shrine of sorts this past weekend. I hung two black clocks (one is set one for his time and one for ours) and a collage frame (of pics of him I have been collecting off Facebook as his new friends post them) in a cozy corner of our living room. 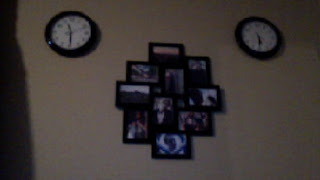 Matt had an orientation day at UC yesterday, and he and Amanda started classes today. Matt thought I was ridiculous, but of course I had to take a picture of him before he drove off to college today.
It was, after all, my yellow bus moment. 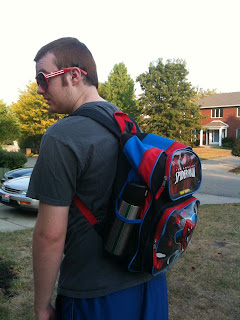 And after that moment, came the next one, and I found myself all alone with a whole day in front of me and no lesson plans. No plans at all, really.
ASSURREALASHEARINGYOURSONSAYHESGOINGTOSWITZERLANDONSATURDAY
But kinda fun, not gonna lie.
Mama Bird is very happy to see her baby birds flying about and so very happy. Homeschooling them was a very fun chapter, but methinks I'm going to like this next one too.
Posted by Joules Evans at 9:47 AM

p.s. Europe is not surreal to me--it's home.

Thanks for the blog Julie! It's so interesting to hear what's going on with you and your redheads! So happy for all of them in their separate journeys and for you in your "new" one!
Angela

Hey, Julie,
I am so glad you blogged about Amanda and Matt. I have been wondering if their college started...especially this being Matt's first year. Joshua and Ben are struggling with chemistry and calculus but the hardest part has been just learning the system!!! Ben missed a class cuz the teach emailed them a new time and place and he did not know to check email!
Organization is key, I guess.
Keeping up with Mikey's blog.
Thanks a bunch,
Becky E
PS Don't you have a B-day coming up soon?