I guess if you saw the pics we posted last night, you realized we unsnagged that snag and have internet in our room now. There is only a tiny little nag remaining. It is dial-up. Remember dial-up? Probably not. We all tried to forget dial-up. S-L-O-W-M-O surfing is dangerous. And Dave growls a lot.But at least we got to message with our kids a bit before we crashed from Day 2.

Took the subway to Vatcan City yesterday. It wasn't all underground. Crossed over the Tiber, instead of submarinish crossing. Fun sign in the treno. 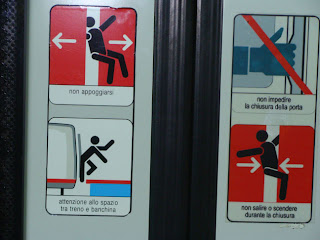 Almost got scammed into a tour by an American who lives here now and does tours. (I'm thinking of doing this as well.) Anyway, he reminded me of my Grandpa Jeffries (who was a lot like the Jimmy Stewart character, Harvey) and that is the only reason we kept listening to his spiel. But in the end we ventured off on our own to crane about the Sistene Chapel. It was quite undoing to stand right there beneath it, gazing at the amazing painting by the sculptor. Here it is, one of the most famous paintings in the whole world, and all he wanted to be remembered as, was a sculptor....signing his paintings Michelangelo...sculptor. Made me thiink about how I'm hoping to be remembered and how I probably will be. I like how good art can get under your skin and make you itch like that. Especially sacred art. The very famous God's finger reaching out to touch man's finger who is reaching out to touch God's is probably the most sublime and true and piercing piece of art I've ever seen. Especially in person. Especially with a sore neck from not being able to take my eyes off the ceiling. It just seems to me to be the most succinct expression of life in all its meaning. It is the kind of beauty, truth and goodness that makes me want to weep a soul cleansing kind of weep, then to drift off into a deep sleep underneath it instead of stars, only to awaken and see it anew and instead of the sun. Sweet dreams.

The other thing that was especially moving to me in the Sistine Chapel was Michelangelo's self portrait in The Last Judgment. Just his shriveled up skin. Almost literally saved by skin of his teeth, even though his teeth really didn't have anything to do with it. Above him and to the top left is Jesus. He is in the hand of Saint Bartholomew, being carried to Jesus, but hovering over the boat heading to hell with the damned. The look on his face. Undoing. The humility was beautiful beyond words.

Poor Michelangelo. My head about fell off my shoulders in only an hour. I can't imagine his poor neck.

It's amazing how they say no pictures and everybody takes pictures anyway. And I don't think it was just Americans. But you've never seen so many cameras foisted up in mid air and clicking away. And then, every once in a while guards would go through and say "No Photographs!" and put their hands over people's cameras as they are unwittingly taking photos of guard's hands.

We also saw the Raphael rooms. I was excited to see The School of Athens, with Plato and Aristotle debating the spiritual and the here and now. And good old Socrates off to the side asking leading quesitons. And truly humble Raphael off to the obscure right side nearly falling off the wall. I had only seen pictures of it and had no idea it was a wall and not just a painting hanging on a wall.

The other Raphael thing that struck us was the Constantine themed paintings. Especially the one where the cross took the pedestal, knocking off the statue of a Caesar of the Augustus type, thinking they are god. I had never seen it before.

Then just as my camera battery gave out we headed over to the Basilica. I could've stood all day in front of Michelangelo's La Pieta statue. I think this was what he meant about being a sculptor, even though I don't know what's wrong with being amazing at two things. It is a statue of Mary holding her dead son and Lord. As a mum, this affected me down to my toes. The amazing thing to me, is how in the world did Michelangelo know how to get Mary right, since he's not only not a mum, but a man to boot!

We wrapped up Day 2 with an amazing candlelit dinner of lasagna and spaghetti carbonara, a bottomless glass of vino, tiramisu and cannoloni, and caffe americano, in a hole in the wall across the street from our flat. 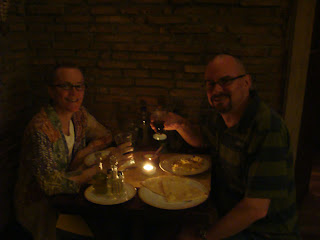 All in all, a buona journo!

Ciao and Amore.
Posted by Joules Evans at 6:51 AM

Hi kids,
I can't believe you wrote about the Michelangelo painting on the Sistene ceiling!! I was just thinking about it this morning as I read Proverbs 1:24 "...I have called and you refused; I have STRETCHED OUT MY HAND and no man regarded", and that made me think of that painting. It is sad that the Lord God Almighty reaches out to us, desiring that redeeming relaltionship with us, and so many have no regard for HIM.
Eager to see your pics!
Mom/Becky