'Twas The Night Before My Surgery 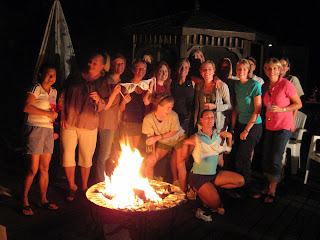 So my tennis buds and I had a bra burning (and one pack of band-aids) (capped off for a lonely two who snuck off to the study to watch the Democratic National Convention to get their Obama fix. I will not mention which two, because I love their guts as much as I own a Right Wing Conspiracy mug, which I am not really part of but like to serve my one friend, whom will not be mentioned, coffee in.

Anyway it was loads of fun. As you can see, I have an amazing group of tennis buds. Plus, it's pretty easy when you say the word party to draw this fab crowd.

There is no proper segue to anything after talk of bra burning, but before we went to my friend, Celina's (right front with a bra that is obviously not hers), Matt, Mikey, my sister Jen, and I went to a prayer service at the Vineyard Student Union, who were lifting up me, and a number of other mums and critical prayer requests. There was so much love and faith in that room that I am still floating on it, and plan to keep it on cruise right into the operating room in a wee bit.

All in all, it was a quite proper, not to mention, perfect, segue to today, at least in my world. And I did get permission for a glass of wine, from a nurse, or best friend or second cousin of a nurse, or somebody, who sounded like they knew what they were talking about and I totally trust them, who answered the phone in the pre-op room, who said she was tight with my anesthesiologist and it was okey dokey--JUST KIDDING, but they really did say I could. And then I had a cup of coffee at 11p.m. to help stave off the caffeine headache that likes to chase me after 10 in the morning. They tried to slide some Folgers by me by sneaking in some chocolate in the coffee grounds, but I drank it anyway, with a very happy heart, I might add. I may be a coffee snob, but I hope I'm not rude.

After, my sister and I packed my hospital bags, and then I went to sleep, resting in God, and woke up still there. In a few minutes we are off to the hospital, and I go trusting Him, and casting myself into His care, and look forward to waking again to say thank you, God (and maybe a few silly things as well. But we'll just have to see about that. You have to remember, I will have had NO CAFFEINE and I might start swinging IV bags around or something and that would not be the delightful delirium you might be hoping for. So just come warned all who visit!)
Posted by Joules Evans at 9:47 AM

JULLIE--WE JUST WANT YOU TO KNOW THAT OUR THOUGHTS AND PRAYERS ARE WITH YOU. WE WILL BE AWAITING "GOOD NEWS"!!!!!!!!

It's nearing 1pm and I just wanted to let you know that I'm sending all my positive thoughts and prayers to you and the surgeons who are attending you right now.

Sorry I missed the bra burning. Those who know me know that I'm not much on bras anyway. Good riddance!!

Look forward to talking to you when you wake up, though I'm not venturing over until you've gotten your post-op caffeine fix.