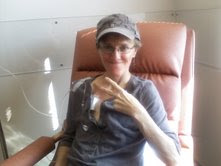 So I made it through my first chemo treatment. So far so good. Well, not actually good, but not exactly horrible. No bucket list hurling up to this point, for which I am so, so grateful. But lots of nausea we are trying to cope with and get meds adjusted to. The main thing to deal with, that has made everything else a bit of a challenge to deal with, is a headache I can't seem to shake. We don't know if the headache is because of all the stress I carried with me into my the port surgery and first chemo treatment and the consequent let down after finally getting past it, or if it is related to the many meds, or possibly dehydration, which I am working on even as I type, sitting here with a cup of lemon zinger hot tea. After 650 mg. of tylenol, and then 2 advil and a gaterade. Not to mention the ice pack. Nor having my boys lay hands on me today and pray for me.

So I went into my first chemo treatment on edge to say the least. First I didn't feel quite up to par from the port surgery, nor the mastectomy for that matter. I kept thinking that everything had been happening so quickly (for which I'm grateful for my life) but that I was just wishing we could take a time out and let me catch my breath and heal a bit more. But this cancer was a very aggressive and fast growing cancer and Dave and the kids and I had gone in this with the gameplan of being more aggressive. And both my breast surgeon and oncologist had recommended we should stay that course, as in being life-saving and not so much an option anyway. Whatever happens, we do not want to have any regrets that we didn't do everything possible.

Which started with a prayer meeting on August 23rd, giving this whole battle into God's hands, letting Him fight the battle for us, letting Him lead the way and following Him as best we can. His hands are big, and have orchestrated everything exactly as it has had to happen to heal me to this point.

We had a follow up praise meeting on September 27th, to thank Him for that, and to send me off proper into this next phase, the chemo. It was lovely, and I think He likes it when we remember to say thanks for all the things we ask for and receive.

So the actual chemo treatment was not that bad. My nerves going in, they were bad, even on the valium I took in preparation. The main thing I was worried about was them pressing around on the port, which is still smarting from the recent surgery, and of course the first poke into it.

They did not press and the poke was a piece of cake, and made me immediately grateful that I chose to get a port over 21ish IVs.

I think I had about 2 hours of meds drip in, including some for nausea, nerves, the adriamycin (which they call the "red devil" because of it's color, which goes in that way and comes out that way) and the cytoxan. I do have toxic pee right now, which has bought me my own bathroom at home. And the boys are going to make a fun sign to put on the door.

The day pretty much knocked me out and I just tried to sleep it off. I soaked two pillows and two sets of pjs waking up in sweats, followed by chills, followed by sweats...ad nauseum, but again, thankfully not followed by ad hurlium.

Today I still woke up in a similar state, and not excited about going back to the oncologist to get the white blood cell shot, which has its own achy side effects. The shot was fine; my nerves were worked up again for not much. And we will see how I fair tomorrow and Thursday, which are that drugs big days. By Friday I hope to begin to turn the corner from round 1 and look forward to the week free of treatment and side effects before Round 2 on October 13th. Which happens the day before Matt's sweet 16. So the real question, is, will I still have hair, and if not, what could we paint on my head to do my Matt's sweet 16 up proper?

Cheers, and thanks for praying. Please don't stop. I think Bon Jovi said it best, "Whoa, I'm living on a prayer."
Posted by Joules Evans at 7:38 PM

Julie,
So many prayers and thoughts going your way from Florida (and from Georgia - my "lost" family! - I miss them!). Only one computer up there (and it's a dial-up :0/) so I keep them informed. We are all always praying for your good health and keeping in you in our thoughts! I feel really bad for you - pain is bad enough but nausea - ughhh, to me there's nothing worse (except maybe humorless men - but we covered that already!) Hopefully they'll get your meds figured out soon and keep the nausea at bay. Thanks for blogging and keeping us informed, even when you probably don't feel up to it! (and thanks to Dave too, for keeping us up-to-date!)
Angela

Thanks for the post and pix. I'll check in on you later. hugs!

Dear Julie,
You are always and forever in my thoughts and prayers.

I can't type any more because it's raining in my office space.

Yho Julie,
Prayer, you say? You got 'em from Indiana...big time!
Becky and Chuck

Julie,
As I see your picture I am very familiar with that kind of chair, port and hat look. I am all too familiar with the state you are in with the nausea. I am shedding some tears because I feel for you in this first week of Chemo. It was such a blur when my sister went through it for the first time back in 2004, since all I did night and day was pray. I would love you to know that I think no hair is a beautiful sight. I reminds me of my sister and the way she used to say she looked like a baby bird. I just love that memory. Sorry to talk so much of Lori but she was my hero. I think that someday with all the prayers we are praying that there will be a time when we can say the breast cancer was a thing of the past. Hope to visit you soon. Love -Kim Wanamaker

Hey Jules,
Just want you to know that you are so often in my thoughts and prayers. I'm so glad that you are turning the corner, at this point. You are an amazing person of strength. God's banner over you is always love. He will be your source of strength when you are weak. You are loved!
Wendy