I hear it's just natural to go all introspective after one gets past the fighting to survive cancer stage to the putting of the proverbial gloves down and just being a survivor stage. That's where I am. I've been reading leaves to try and figure a few things out. Not tea leaves, but the leaves of my calendar.
January has been crazy. For one, I didn't see my oncologist once. Now, Dr. Lower is the best oncologist in the world if you ask me, but I'm not going to lie and say I missed chemo. I can't tell you how my calendar feels now that it is not in chemo's orbit. Honestly I think it's in shock with all those wide open spaces. Now what?
First it's just trying to resume its orbit around our family, and especially my redhead peeps who still flutter about and have not quite fled our nest.
On the 14th, a friend of ours, Jenn Silver, was performing at a UC pub and my Redheads surprised me by getting up on stage and singing the "Cancer is a Bitch" song they wrote for me.
On the 20th my baby girl turned 19. Here is our traditional "how old is the birthday kid" picture. Get it? The boys are holding up 20 and Amanda is minus-ing the 1 to = 19. 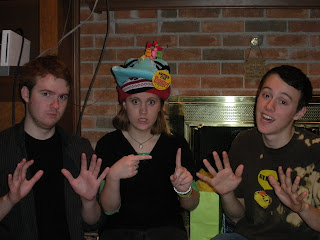 And here is their personal favorite traditional "kiss the birthday kid" photo. My Amanda is following in my footsteps these days, having switched her major to Journalism. Recently she had her very first article published in the University of Cincinnati Newspaper. An opinion piece no less! Check it out here. She has also been quite a prolific little poetess lately. I have her blog listed under my blogspring at the bottom left of my blog. Or you can check it out, follow it, and most importantly, comment on it, here. She LOVES comments.
On the 22nd, my boys performed in concert with their friend, Logan Sand, as part of his Band.
Matt was stage right and played the acoustic guitar. 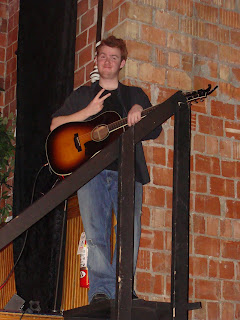 Mikey was stage left, on the Djembe. 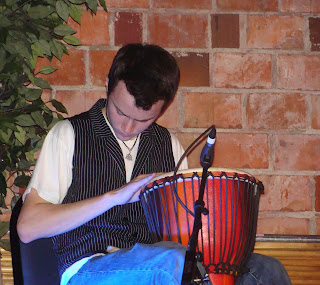 The concert was at one of the coolest venues in Cincy, The 20th Century Theater. It was packed and it was a great show. Logan was releasing his sophomore CD, "New Day" and raising awareness and funds for their upcoming tour this summer. Yes, we are not just "letting" our boys go on tour, but are so excited for them. I might even be a roadie if they "let" me. You can check out and follow Logan Sand and the Band here. They are really good and I'm not just being biased. Even if I am a wee tiny bit.
On the 25th, the boys and I started back up for our final semester of co-op and homeschool. This is probably the part of my calendar that I have to make spaces for, because boy do we all have senioritis. Not to mention, spring fever. And I really do want to finish well. I think this has been weighing heavy on me because it feels like there is so much to do between now and our, I mean, the boys' graduation on May 15. Besides all the homeschool stuff, there is the spending time with part before they really learn to fly, like Amanda has, off to college.
With all this crazy fun with my calendar, I have been feeling the words Jesus said to his disciples when they kept falling asleep while he was praying in the Gethsemene: "The spirit is willing but the body is weak."
And honestly, my spirit is a little discouraged that my body isn't keeping up. I don't know if it is just the let down after being in fight mode for a year-and-a-half, but I seem to have hit some kind of wall and my blood pressure has taken a jolt. It has been spiking crazy like the January leaves of my calendar. My oncologist and general doc both think it's just aftershocks from chemo and that it will settle down and find it's new normal. I'm having to take Ativan twice a day to help the process. Which makes me not as productive as I feel like being. Which stresses me out a bit. Which doesn't help things. It's a vicious cycle.
Anyway, that leads me to the introspective part. What pressure I feel to fill the white spaces on my calendar in right. I don't want to waste a space. Who has the time to waste, really? But the words that seem to be percolating in me, are life after cancer and before death. Feels heavy, I know, but they are true. And I don't mean them morbidly, because the focus is on LIFE in between those two stages, the state I am in.
Besides calendar leaves, I have been reading some other leaves that have been helpful. I am glad my chemo brain is starting to let up and let me get back to reading like I used to, even if ever so slowly. But a book I have been working my way through, ever, so, slowly, through, despite and because of my chemo brain, is Surprised by Hope, by N. T. Wright. I dig his theology, but the title might have well had my name as its subtitle, because I just had to have it. I was really in the mood to be surprised by hope.
Hope in God, even in the middle of cancer, and come what may after cancer and before death, it is what I hold onto. It is what I hope to stay true to. It is what I hope to dive off and into the rest of my days. I hope I always leave it in my wake. I hope it's spoken with my last breath.
I'll close this lengthy post with a passage from Surprised by Hope that I have been trying to suck marrow out of and give myself a transfusion, so that my perspective will be in line as I fill in spaces on my calendar so they will be aligned to God:

"What you do in the present-by painting, preaching, singing, sewing, praying, teaching, building hospitals, digging wells, campaigning for justice, writing poems, caring for the needy, loving your neighbor as yourself-will last into God's future. These activities are not simply ways of making this present life a little less beastly, a little more bearable, until the day we leave it behind altogether....They are part of what we may call building for God's kingdom."

You have been, and I know you always will be, building God's kingdom, in all the spiritual, relational and creative ways that you do, often unappreciated by some, but so essential and important.

Your sharing and insight is inspiring. I love Wright's book(s), too. Have a glorious February!

Your introspection and hunger for God is truly a blessing and testimony of God's glory and His Spirit at work in your life. He cares so intimately for us! You are loved, dear sister.....Miss you!!!
Wen-erd

I like your marrow-sucking metaphor. Speaking of metaphors, Fr. Manto's sermon on Sexagesima Sunday was about the Sower & the Seed and God's Kingdom. He mentioned how incredible it is that, from something so small as a seed, can come a huge tree! God has planted the seed of His Kingdom and set it in motion through Christ and we bear the fruit for Him. Hope is what keeps us growing and bearing fruit. This post seems (to me) to be a digression but I HOPE it's been encouraging. I will keep the soil ready and fertilize those seeds and hope my life bears bananas and/or a big tree, like a Sequoia. Or at least a lovely little Redbud tree.