In Loving Memory of My Gramcracker 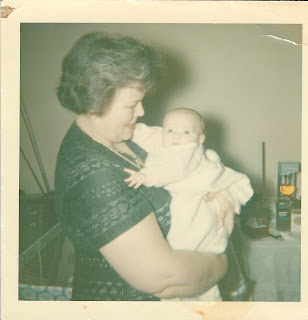 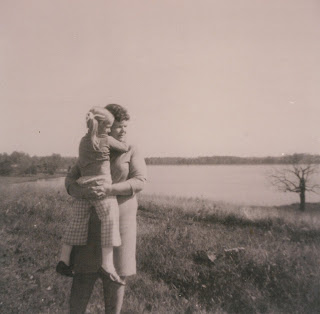 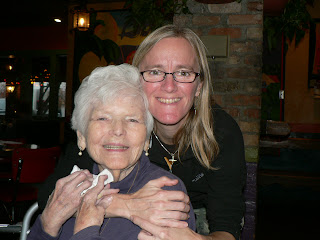 This was my sweet Gramcracker, Gloria Eileen DeVore Jeffries, May 11, 1922 - February 12, 2009. I don't remember exactly when I started calling her Gramcracker. Somewhere along the road I got taller, relatively speaking, as in, than her; I guess I just felt like my cute little grandma needed a special pet name. Gramcracker just rolled off my tongue like it was destiny. I wish there was s'more to it, but there's not.;)

Her given name was Gloria, which means glory. It doesn't surprise me that she didn't go by it, though. I don't know all her reasons, but I like to imagine that she gave her given name to her God, just like she lived, for His own glory. She went by Eileen, which means light, and makes total sense if you knew her. When she was a little girl and shortly after she started speaking, she called herself, "I-E". At 21 months, she was saying her prayers. Begging her mum to read the Bible to her about Jesus. Begging her mum to sing hymns to her. (I use the word "begging" in the loosest sense of the word, if you think her mum actually had any choice, and only because that is the euphemism her mum wrote in her baby book. If you knew my Gramcracker, you read that word more like an antonym.) At two-years-old, two of her favorite songs were, Jesus Bids Us Shine and He Wants Me for a Sunbeam. Once when she was sick, she "begged" her mom and grandma to sing those, and two other hymns, to her, over and over again and again, until they were almost sick but literally tired of them. And probably hoarse, if I know my Gramcracker. Now that I come to think of it, maybe Gram-cracker, was more of a divine tip, than a mere slip of my tongue. Grandma + firecracker = Gramcracker?! By the time she was four, she put childish things and prayers aside, preferring to say The Lord's Prayer before bedtime, rather than the "little" one her little brother, Neal, said. From a very young age, I-E seemed to embody her name. Almost as if the children's song, This Little Light of Mine, I'm Gonna Let it Shine was written just for her.

She graced my life with her godly presence and prayers from the moment I was born until last Thursday night when she went home to be with God, and my Grandpa. That is 15,845 days that she was my example and 15,845 days that she prayed for me. One of the most significant and beautiful things anybody has ever done/will ever do for me. It humbles me and lifts me up all at the same time. And makes me feel very, very blessed. And, yes, Josh Groban is singing You Raise Me Up in the background of my mind right now when I think about it.

I count it a blessing that I was able to visit her in the hospital before she went to be with God. I hadn't been able to see her since before I was diagnosed with breast cancer in August, neither of us being in condition to travel. She had a fall near the end of January and ended up in the hospital; the nasty fall ended up being a nastier domino. A slight fracture in her pelvis, terrible bruising on her arms, edema in her legs and feet, congestive heart failure, low blood pressure, digestive issues, a series of mini-strokes, delirium. Complicated by a heart murmur and the fact that she was quite hard of hearing. I had just had my final chemo cocktail; and thankfully, when I turned the corner from it Amanda and I were able to able to go see her.

When I walked in the room, she started crying and said that she didn't think she'd ever be able to see me again. Then she proceeded to worry about me getting sick by coming to the hospital. She said she didn't want her sufferings to add to my own. Which was very much like her, but the last thing on my mind. We had a lovely visit. She was in good spirits. We chatted back and forth with the help of a little white board that I wrote on. I was never good at yelling things to my Gramcracker like my mum and aunts were. ;) I never could even bring myself to try it. I was very glad for the white board, and think I got to say everything I wanted to. And I hope I brought her some comfort and cheer. Before we left, with Dave and the boys on speaker phone, Amanda and I laid hands on her, and we all prayed over her. We laid the phone next to her "good" ear, and I'm pretty sure she somehow heard all the prayers because she seemed to be leaning into them, and to be soothed by them. I keep playing that day over and over again in my head, and it was perfect. My sister and cousins, all had similar moments with her on the phone, where, looking back, we all know she was saying her goodbyes. I felt that from the first words she said to me when I walked in the door, to the last ones before I left, where she was telling me that I could have anything of hers that I wanted.

She suffered so much those last couple weeks in the hospital that it broke our hearts. I think she knew she was dying; and I think she was ready. And, characteristically, she did it like a faithful servant of God, and on her own terms that she had with Him. It makes me think of some passages from I Peter.


To me, this describes her last days here with us. She said her goodbyes, making sure she left everyone feeling like they were her favorite. Tried to give all her stuff away. One day she told my Aunt Cheryl to give her clothes and canned food to the mission my husband's family runs. Cheryl asked her what in the world she thought she was going to wear when she got out of the hospital. Without missing a beat, my Gramcracker said they could just put a towel around her. This was my Gramcracker, and not terribly unlike my Grandpa, who, when he went before Gramcracker, a few years ago, had requested that we bury him in his bathrobe. I am pretty sure they are having a very interesting reunion right now.

Having said her goodbyes, she rolled up her sleeves, fixed her eyes on Jesus, suffered everything that came her way, until He wrapped things up and then her in His arms.

Gramcracker is not suffering any more. She "fought the good fight...finished the race...[and] kept the faith" (2 Tim. 4:7). She has found her rest and her reward. She is happy with God, and probably bickering with Grandpa, in Heaven. And as she is now part of the "great cloud of witnesses" that surround us (Heb. 12:1) I have no doubt she is cheering us on just like she did while she was here with us, to follow her example as she followed Christ (1 Cor. 11:1).

As a sidenote, now that Gramcracker is with the angels, I feel quite certain that she has settled an eternal debate that exists in our family, and would like us all to know that angel cake is meant to be without the icing. "Stop all your fussing," she used to say. Or at least that's what we thought she was saying. What I think she was really saying, was, "Stop all your icing". It's just that some of my family is quite stubborn and a bit silly.

Julie, I think it is so incredible that you had such a special relationship with your Gramcracker. I know that just makes your loss seem even deeper, but what an incredible gift to have in your life. Thank you for sharing her story with us. Big hugs to you!

As I read (through watery eyes) you can feel the love that came with every word you wrote from your heart. A beautiful memory that you have been able to put into words.
Thank you for sharing.
Love ya

Julie,
After that we really need to meet. I will continue to pray. I hope you and your family find joy in the days ahead. I enjoyed reading the entry.
Lori

I have been waiting for this post, it is of course everything that I want to say about grandma and more! I am so sad that Grayden will not get to meet his GiGi, but am comforted by the fact that he and the rest of us will have a true angel watching over us. I feel so blessed to have had such a special grandmother.

What a beautiful tribute to an obviously beautiful woman! You are very lucky to have had someone like that in your life and to have so many wonderful memories. What a blessing!

This is a beautiful tribute to a very special lady in your life. I feel like somehow I knew her - maybe because the words you wrote sound like such a reflection of Christ! So grateful that you have such wonderful memories. You've been in my thoughts and prayers this week.
I love you! Wendy

Mommy and her munchkins said...

Julie,
I am so very sorry to hear about the loss of your sweet Gramcracker. I've never laid eyes on a Gramcracker as beautiful as she. You have such a way with words...I could not only see the love you shared but could feel it from the inside out. You can bet she's up there making compromises with the Big Guy on your behalf! Congratulations on being done with all the Taxol. Now you get the good stuff for a year!!! :)

P.S. We leave for Maui one week from today!

Julie,
Your blogging about life and your journey through its trials and joys has touched me a lot, so tender and honest and bare. This special tribute to your special grandmother is beautiful. Keep getting healthier and whole.
Blessings.
now the word I have to type in for verification is 'itchin.' How wierd is that?

I went online to find Gram Crackers and milk for a tribute to my mother who just passed away and came upon your site. To see your heart on this page is warming as my heart is heavy as last night was my mothers birthday and I had dreams of Gram Crackers and milk that she gave me as a small person. The spirit is strong among all of us. I wish we all could see it as you do.

My art is about that spirit.

I went online to find Gram Crackers and milk for a tribute to my mother who just passed away and came upon your site. To see your heart on this page is warming as my heart is heavy. Last night was my mothers birthday and I had dreams of Gram Crackers and milk that she gave me as a small child. The spirit is strong among all of us. I wish we all could see it as you do.

My art is about that spirit.