Yay For Not Chemo Weeks!

In keeping with my head looking like a baby's (although, for all of you out there dying to rub my head and make a wish...I would just hang on a bit, since it still has a little stubble on it, sort of like the play- doh barber shop toy - but feeling like sandpaper and not so much play-doh), and getting thrush (a baby infection) from the first chemo, I have been keeping track of my "firsts" this week. Most of these have to do with being the first time to go somewhere with longer hair on my legs than on my head.

I have never really thought of myself as a vain person. There are some days when I don't even look at myself in a mirror. And, if by chance I do catch myself in said mirror while brushing my teeth, it's usually before I've had my coffee, so I carefully avoid eye contact with that person in my periphery, so as not to have to have pre-caffeinated conversation. It's not that I'm not a morning person, exactly. It's just that I am quiet before I've had my coffee. Now give me a glass of wine and I'll be chatty. But I digress. Mostly because I've been second-guessing myself on the vanity issue since I've actually had a hard time going out without my hair. And it's not even like I was crazy about my hair. I had a really bad double cow-lick (I'm not even looking that up to see how it's spelled because it is what it is) which is half the reason gave up looking in the mirror and trying to do anything with my hair. Because it was pointless to try and make it lay any way but the erratic way it wanted to in the back. Plus, I'm lazy. Not to mention, I've never been a primpy sort of girl. I really don't even know what primping is, if you want to know the truth. I mean, I know the definition of primping and such, but the sordid details...not so much.

Anyway, I've had to come to terms with myself and going out wth a hat and knowing I'm not fooling anybody. Not that I was trying to fool anybody. But I just am not in the mood to be a billboard. It's interesting...before when I was sick I didn't look sick; and now, technically I'm not sick, but I look sick. It's hard enough to keep straight with chemo brain, let alone look in the mirror at that strange person looking back, or know what you look like to others. Vanity, I know, and it drives me crazy, because before, the clouds were in my coffee, but now I'm so vain that I do think the song is about me. Or something like that.

So the three biggest things I had to do, my three biggest firsts, were going to the club to work out, teaching my Brit Lit class, and going out tonight with my tennis buds.

We belong to this really nice tennis club that has a hot tub that my achy, though admittedly, warmer than my head, legs have been begging for. This presented two initial problems. One, finding a swim suit, which I will just leave at that. And two, figuring out which hat to wear since I don't think I'm a swimming cap kind of girl. So I've gone twice now. Got in the hot tub. Almost cried because it felt so good to my very happy, hairy legs. Then got in the pool and took one of those noodle floaties and kicked, backwards, 4 lengths. Yesterday I did the 4 lengths again, then took one of those kick boards and made it 2 more lengths, forwards, although I'm not sure how I didn't drown since I sort of propped my neck up on the kick board and was barely hanging on - let's just say I am having issues with my port, and getting my full range of motion back, not to mention my strength. (I can't seem to keep myself afloat with the kick board way out in front of me, let alone the dreaded breast stroke. I know, a very bad joke but I really couldn't help myself because it was just there. In fact, recently I've been wondering if I will ever be able to serve a tennis ball again. But honestly, I have enough issues trying to shift gears in my mini, which doesn't instill the utmost confidence, and so I won't go there. Right now.) But I've been to the club twice and even worked out. Also, have been walking, trying to fight the fatigue, and am up to 2 miles. If you think about it, throw in a bike, and I'm practically in training for a triathlon. 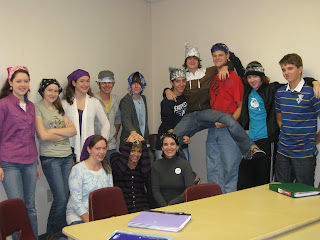 The second "first" was standing up front and teaching my Brit Lit class. On the first day of class, I had told my students that I didn't really like standing up front, let alone stand up there bald. So I walk in yesterday and they are all wearing bandanas. How cool is that?!

The third "first" was going out tonight with my tennis buds, to one of my most frequented restaurants, P. F. Changs. As much as I want everything to just be like always and feel all normal, it just doesn't feel normal going out without your hair. Here's the email I sent out in reply to the invite, just to break the ice for myself:

Joules is in. Looking forward to seeing everyone. Sorry my hair can't make it. Except for the hair on my legs, which I will probably NOT braid for the occasion, but which I totally could if I wanted to. So, if you're on the fence whether or not to come, I'll just let you know that it may be the last time you can see my hairy legs until I'm done with these first 2 rounds of chemo and my hair grows back in the spring. Which seems an appropriate time for it to sprout.

Anyway, it was a blast of course. And it was so good to go out with the girls and do something so normal. I almost forg 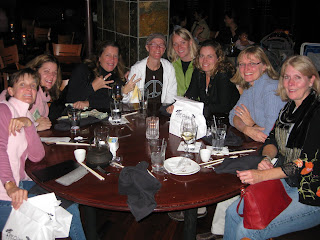 ot I didn't have hair under my hat. But then I could see it in all of their eyes, that they were dying to rub my head and make a wish. Luckily, we were at a Chinese restaurant and they give out fortune cookies because I think this saved me, not to mention, their delicate tennis hands. I really liked my fortune, btw. It said, "You will become a great philanthropist in your later years." (Once, on Mother's Day of all days, I got a bad fortune that fortunately I can't remember, but the next time I came in I told our server and he brought me the whole box of fortune cookies to choose from because he didn't want to have a bad fortune on his tab.) No, I liked this fortune a lot. The later years part, obviously, but doesn't the philanthropist part imply that I'm going to have lots of money to give away?

So I'm not really sure if I conquered vanity or anything. Basically all I did was what Nike has been saying all along: Just Do It. And it got me thinking, maybe that's how I'm going to make all my money that I'm going to get to give away in my later years. Maybe Nike is going to pick me up just like Sharapova and Serena. At least, that was what I was thinking.

Well, this is a long post, but I have one more thing to cover - The famous Name the Port Contest. Here are the entries to date:
This is the last call for entries. I plan on choosing before my next chemo treatment on Monday. And remember, there will be a prize! Thanks for playing.

Well, I think you are very brave. When you take off your hat, the no hair makes your eyes look very large and it is an interesting look. If it weren't cold you might even work up the courage to go hatless! Seriously, you still look wonderful to all who know and love you and I'm sure still very cute to those who don't. I greatly admire your spirit. At the end of the post, I only wondered one thing....which finger of Mikeys is on Becca's head?

It was great seeing you at PF Changs and I'm not just saying that 'cause of the lettuce wraps.

Thanks for updating your blog. Your fans were getting restless and just a little demanding.

Just wanted to let you know that your lil Nike (mini Nike too) are thinking about you. We will have to start a collection of hats for you. Of course you have to show your support for good ole IU!